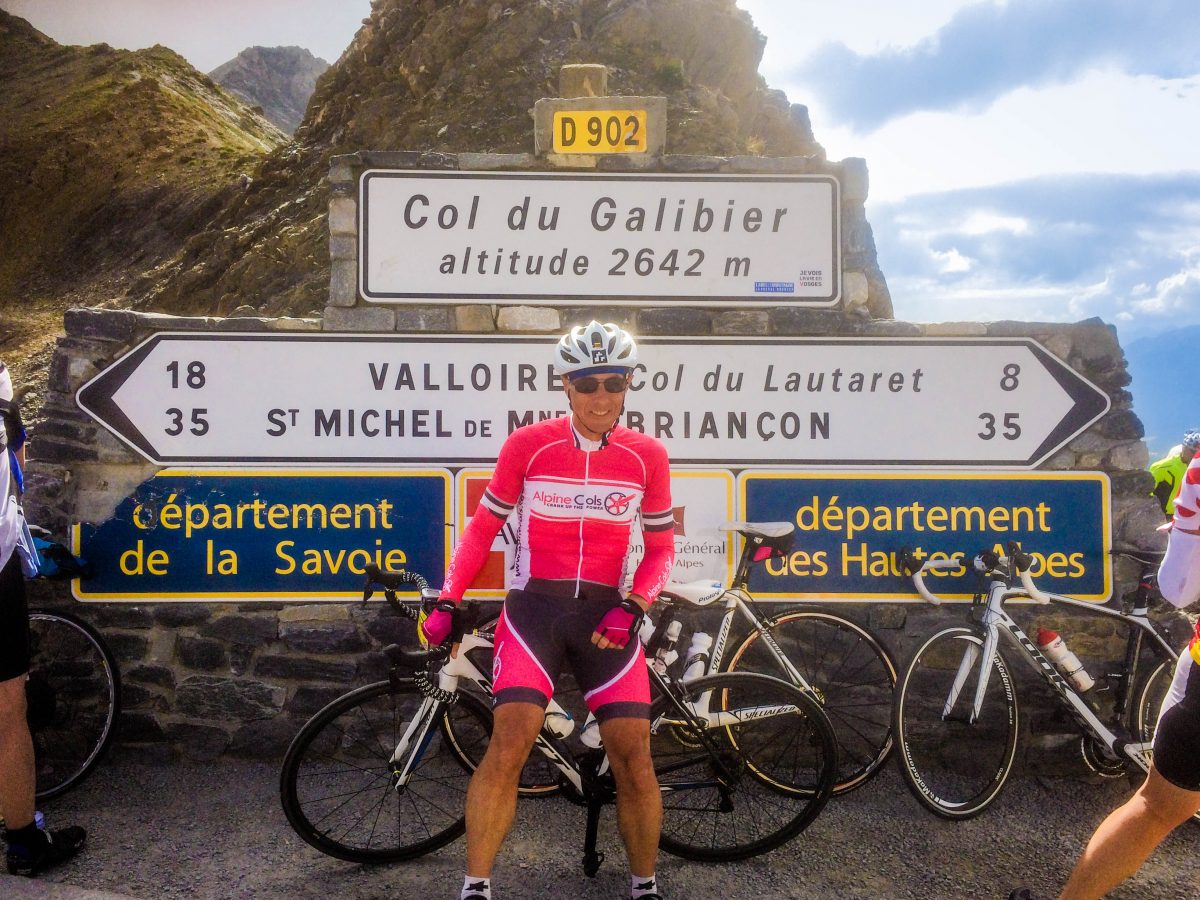 When cyclists get to talking about the hardest climbs in the Tour de France, it is never long before someone mentions the Galibier. Right up there with the Tourmalet and Mont Ventoux, the col du Galibier has a well-deserved reputation.

The 4th highest paved pass in France at 2,642m, the Galibier is the Alpine pass most often used by the Tour and certainly one of the most feared by cyclists. The altitude, the majesty of the scenery, the length of the climb and the emotion all conspire to make this a tough test for any cyclist.

We can argue for hours about which is really the toughest. Consider first the Galibier’s vital statistics: starting from Valloire, the climb is 18km long and takes you from 1,397m to 2,642m, for an altitude gain of 1,245m.

Measured from Saint-Michel de Maurienne, at the bottom of the valley, you must ride a total distance of 34.5km and climb 2,100m to reach the summit of the Galibier. True, there is a 5km descent between the col du Télégraphe and Valloire, but as anyone who has ridden the Marmotte will tell you, this is over so quickly you barely notice it.

“Oh ! Sappey ! Oh ! Laffrey ! Oh ! Col Bayard ! Oh ! Tourmalet ! I will not fail in my duty in proclaiming that next to the Galibier you are as weak as dishwater: before this giant there’s nothing one can do but doff one’s hat and bow down low.”   –    Henri Desgrange (translation Marvin Faure)

One can indeed doff one’s hat, not only to the mountain but also to those legendary men who rode it first. Needless to say, conditions were nothing like today. In those days the road was little better than a mule track, the men’s bicycles weighed more than 14kg, and for the first few years the bicycles were single-speed only. In 1911 the Galibier was in the middle of an epic stage of 366km from Chamonix to Grenoble, and only three men made it to the top without walking. These were Emile Georget, who had the honour of being first over, Paul Duboc and Gustave Garrigou.

Here is more from the original report:

“When he passed by close to us, filthy, his moustache full of snot and leftovers of his last meal, and his jersey muddied by the ooze from the last stream where he had wallowed, he spat at us, dreadful and lofty: “I am speechless!”     –    Henri Desgrange (translation Marvin Faure)

The first road to be passable with a carriage was finished in 1879. Seven years later, faced with the enormous challenge of clearing the snow from the last few kilometres, the army built a tunnel at 2,556m, 86m below the actual summit. The tunnel was used by the Tour de France for the first 90 years, thus avoiding the toughest part of the climb, the last kilometre at 11%.

“The tunnel should have been built much lower down. That would have saved us a terrible ordeal”
–    Emile Georget, July 10th, 1911 (translation Marvin Faure)

The greatest climbers in the history of cycling have made it a point of honour to lead over the col. After Emile Georget in 1911, Bartali (the Man of Iron), Coppi (the Campionnissimo), Bahamontes (the Eagle of Toledo), Gaul (the Angel of the mountain), Merckz (the Cannibal) , Zoetemelk (the Dutchman from France), Ocaña, van Impe (the Marmoset of the peaks) and of course, Pantani the Pirate have all crossed the Galibier in the lead.

There is a memorial to Marco Pantani 5.5km from the summit on the northern side of the col. It was here, in awful weather on July 27th 1998 that he made a devastating attack to leave his rivals far behind. The race leader Jan Ulrich could do nothing. Pantani flew up the last few kilometres, overtaking the breakaway, and then threw himself down the descent to the Lautaret. Joined by three other riders, Christophe Rinero, Rodolfo Massi and Fernando Escartín, they rode hard to the foot of Les Deux Alpes where Pantani once again turned up the power.

At the finish that day he beat Bobby Julich by 5 min 43 sec and Jan Ulrich by 8 min 57 sec, taking the yellow jersey and sealing his victory in the Tour and his place in the history books.

The Galibier has a starring role every year in the Marmotte, the oldest and still one of the very toughest one-day sportives. Read here more about the Marmotte and how to ride this challenging event.