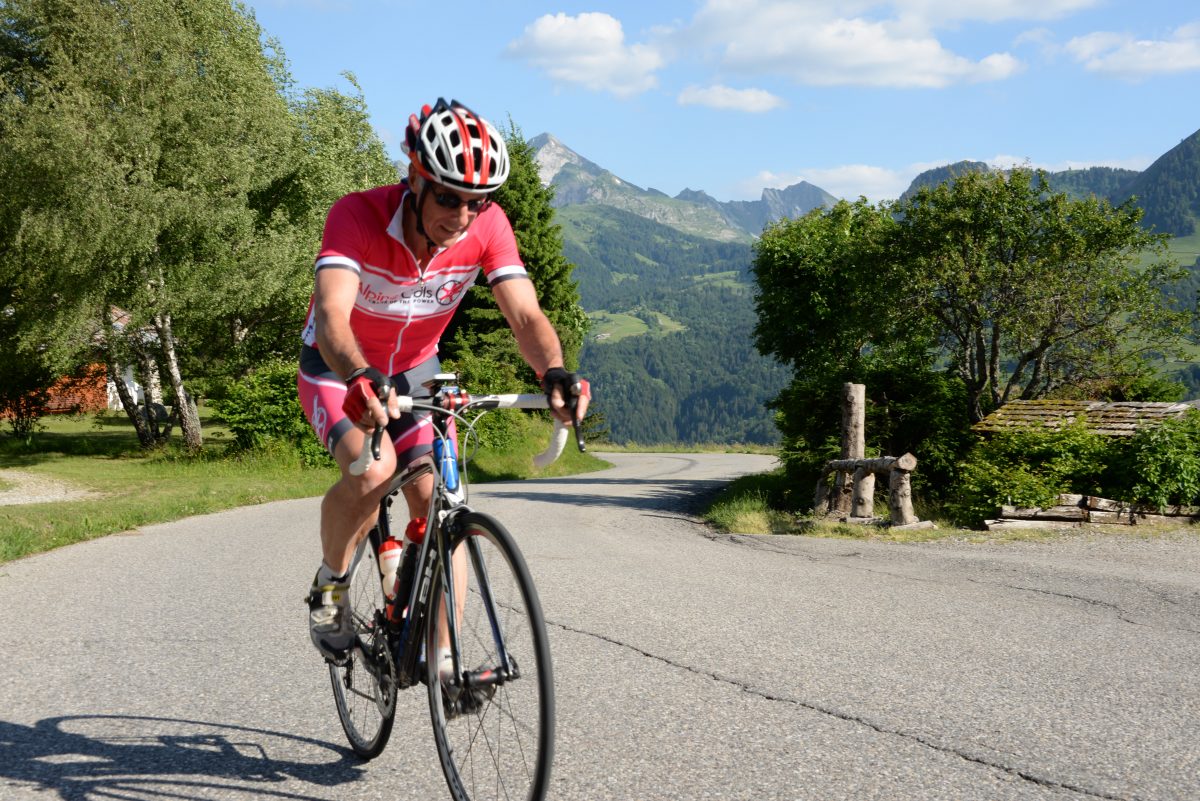 It was on the third climb that he felt the first warning signs: a fluttering in his quadriceps. At first it was a slight twitching in the fleshy part of the muscle just above the knee on the inside of his thigh. It began softly, almost imperceptibly, like the tiny white cloud on the horizon that presages violent thunderstorms in the late afternoon. Sometimes he felt it on one side only, usually the right, but other times it seemed to hit both legs at once. This was one of those times. He knew immediately that this was not good news. Once cramps get hold, there is no going back and no cure except rest and recovery. The situation was potentially serious, because although he was over the first two major climbs, there were still over sixty kilometres and 1500m to climb before the finish.

It was essential to take action, and fast. He slowed down, took the pressure off and fumbled quickly in his pocket for a gel, broke it open and squeezed it down as quickly as he could, chasing it with several swigs from his water bottle. The only hope was to reduce the demands on the leg muscles enough while giving the gel time to work its magic. He used his thumbs alternately on each leg to massage the muscles, and the twitching disappeared as he turned his legs faster to flush the toxins out, maintaining 90-95 rpm for the next couple of kilometres. The gradient was an easy 3% to 4% at this point and the road was winding along the flank of the valley, green fields and the occasional farm house and orchard on each side. Higher up the mountains were thick forests, with rocky cliffs protruding through, the naked grey rock contrasting sharply with the lush green leaves on the beech trees and the darker hues of the conifers.

The sun was warm on his back. He rode along comfortably at the rear of the small bunch, eyes on the wheel spinning just in front, enjoying the comradely silence of the other riders. His rapid action with the gel and the change of cadence seemed to have done the trick. His confidence back, he was feeling good.

The little peloton passed an old stone farmhouse, built in the characteristic local style. The house was about 25m wide, in three parts. There was a stone arch in the centre, big enough to allow a fully stacked cart through to unload the hay directly on to the upper floor. On the right hand side the door was open to the cowshed, empty at this time of day but where he caught a quick glimpse of the milking pens and the floor strewn with muddy straw. On the left of the house was the dwelling part, with a low entrance door underneath the outside staircase that climbed the façade from right to left and stopped at a second door on the upper floor. There were geraniums in window boxes, their bright red flowers contrasting sharply with the deep green of their leaves. The roof was heavily tiled and shallow-sloped to retain the snow for extra insulation in winter. It overhung the front of the house by at least 2m, providing shelter from the rain and shade from the noon-day sun. There was a wisteria growing up and across the façade that must have been at least forty years old. Its gnarled trunk, grey and twisted like old rope was as thick as a man’s thigh. The flowers were long finished now but must have been lovely in the late spring. A dog slept in a patch of sun on the rutted concrete near the water trough, oblivious to the multi-coloured peloton passing in front.

He was going slowly enough at this point to see the date of construction carved in the capstone above the central arch: 1815, almost two hundred years ago. His mind wandered to what was going on in the world in 1815 and how different life must have been back then. The house certainly hadn’t changed much, nor the rhythm of the seasons, but the farmer’s life must be much easier now with electricity, modern machinery and the support of the EU’s Common Agricultural Policy. 1815, he suddenly recalled, was the year of the battle of Waterloo and Napoleon’s final defeat by the combined forces of the Allies. How long would it have taken, he wondered idly, for the news to reach this remote farmhouse? Weeks, or perhaps even months?

His reverie was abruptly brought to an end by the return of the cramps. The peloton had reached the head of the valley, where the gradient changed abruptly. No more an easy 4%, the road pitched up sharply through the trees, averaging 7%, with short stretches at 9% or even 10%. The sudden change and the resulting stress on his tired muscles were too much. Each downward pedal stroke brought a sharp pain as the quadriceps contracted. He tried standing on the pedals, hoping the change would ease the cramps, but it only made things worse so he quickly sat down again, changed to the lowest gear and slowed right down. In seconds a gap of 10m opened up on the peloton. It couldn’t be helped. There were several more kilometres to climb before the next col and he knew at once he couldn’t force his body past its physical limits: no amount of willpower can overcome cramps caused by severe depletion of the glycogen in the muscle.

It was going to be a long climb. He sucked down another gel and settled into a rhythm that his legs seemed able to accept. First one, then two, then several little groups of cyclists overtook him, some casting curious glances. After a while things seemed a little better so he started testing the limits. Like a sailor making constant small adjustments to find the perfect angle to the wind, he alternated speeding up slightly and backing off again as soon as he felt twinges coming back. After twenty minutes, deliverance came at last in the shape of the col. With a feeling of relief, he pedalled slowly over the crest and rested his weary legs, allowing gravity to work its magic. Things were looking up: at least he could keep up with the others on the descent!

Ten minutes later he had descended just over 8 km and lost about 600m in altitude. He crossed a narrow bridge, turned right, dropped to the small chain ring as the road steepened again, stepped on the pedals and both legs seized up. The pain was so sudden and so sharp that he involuntarily cried out. The quadriceps in both legs were rigid with cramp, contracted so hard that movement was impossible. He somehow stopped the bike, got off without falling over and sat down by the side of the road, gasping with pain, both legs stretched out in front of him as stiff as telegraph poles. He had never seen the muscles so defined, bunched up at the front of his thighs like a bodybuilder. The pain was intense. There was no way to relax the muscles. He tried stretching his toes, gently moving both legs, massaging the muscles, all to no avail: the muscles remained stubbornly, rigidly cramped. The sweat was pouring off him with the effort. Trying not to cry out, panting heavily, he shifted around on the gravel, unable to do anything.

After what seemed like several lifetimes (he later determined by looking at his Garmin it was probably something between a minute and a half and two minutes) the locked muscles at last started to relax. Slowly he was able to bend each knee and began to knead each muscle gingerly with his thumbs. They were very tender to the touch, although the pain was less now that the cramps had eased off.

After a while he felt able to stand up, and hobbled the two or three steps to his bike to grab his water bottle. Fortunately the second one was still full, and he drank deeply in the hope that the extra fluid would help his recovery. He fumbled in his back pocket for a cereal bar and, suddenly hungry, ate it greedily. Now that the pain had eased somewhat, he started going through his options. Obviously the race was to all and intents and purposes over: there was no chance of a decent time. Was it even possible to go on? What was the alternative? There was no broom-wagon bringing up the rear of the race to pick up the riders that abandoned: on a cyclosportive you are expected to look after yourself. A taxi? It would probably take hours to arrive and cost a fortune. Hitch a lift? Even assuming a car came by (he hadn’t seen one in the past 30 minutes), there was no guarantee there would be space for both him and his bike, let alone that the driver would be willing to pick up a sweaty cyclist and drive him miles out of his way. No, there was nothing for it but to go on.

Later, he tried to recall those interminable kilometres and the hours it took him to reach the finish line and deliverance. Perhaps mercifully, very little of it remained. There didn’t seem to have been as much as a single metre of flat road. The road was either climbing (most of the time) or descending (occasionally). His legs were extremely tender and the cramps threatened to come back at any moment, forcing him to adopt the lowest gear and crawl up the slightest slope. After what seemed a lifetime he arrived at last at the foot of the final kilometre up to the finish line. Determined not to get off and walk he weaved his way slowly and unsteadily up the lane, every pedal stroke an agony of protest. The finish came as an indescribable relief: unable to pedal another stroke or walk a single step he leant his bike against the barrier and collapsed on the pavement, head between his legs.

‘Give the man a drink. Are you alright?’ He dimly heard voices and felt rather than saw someone thrust a bottle of water into his hand.
‘You look completely whacked. Are you OK?’ said a kindly voice. The owner of the voice crouched down next to him and put a hand on his shoulder.

The words came out slowly, with long pauses.

‘Look, just take it easy, drink some water and then get some food down you, OK?’

He finished the first water bottle and started to feel a little better, but talking still required a supreme effort.

‘Of course. Hold it there.’