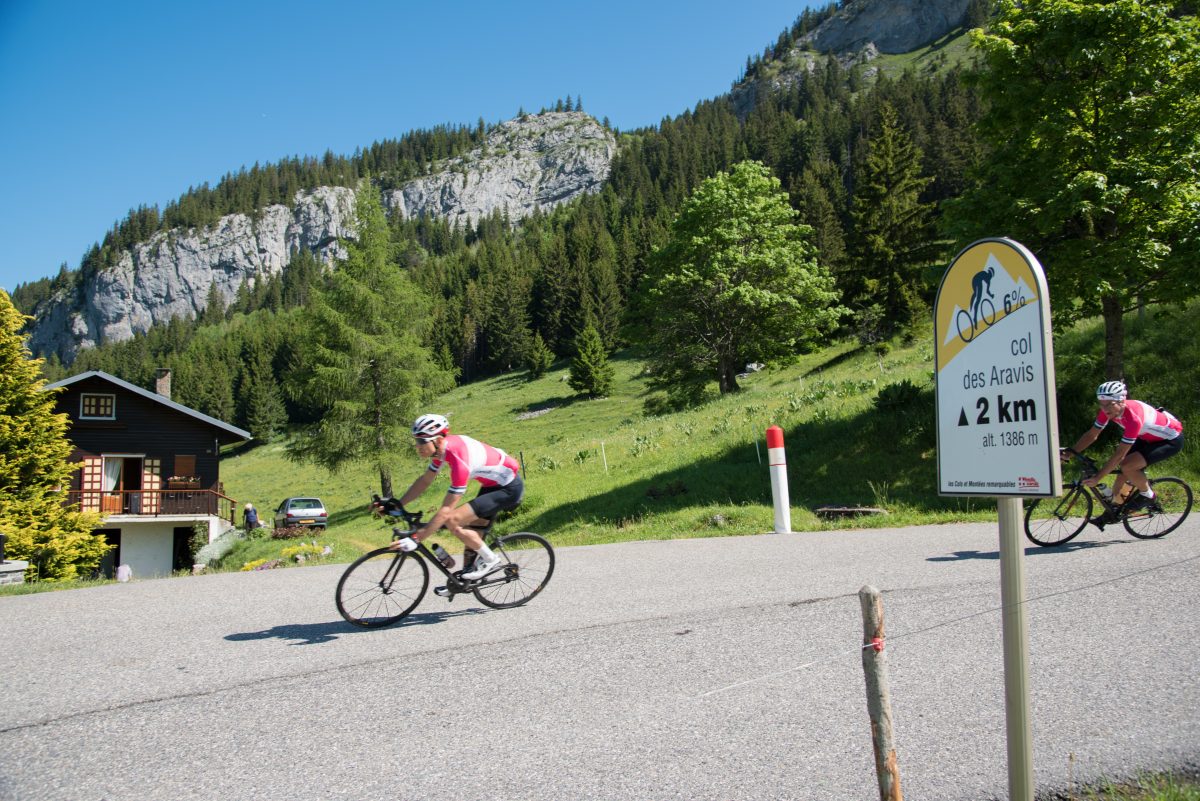 It can’t be an easy job to select the Etape du Tour each year. The constraints are numerous: amongst others, it must be one of the stages from that year’s Tour, it must be in the mountains, suitable for 15,000 riders, including at least one iconic climb, tough enough but not so tough that too many can’t finish, and the logistics must be manageable …

The 2015 route was a tough one, made even tougher by the heat wave on the day itself. It went from Saint Jean de Maurienne to La Toussuire for a total of 137km and 4,500m of climbing. The iconic climb box was ticked by the col de la Croix de Fer (via the Glandon) while innovation was provided by the col du Chaussy and the col du Mollard. Too bad the route couldn’t include the lacets du Montvernier…

Only 9,877 riders were able to finish out of the 15,000 who started, although to be fair many of these were held up by an early accident on the col du Chaussy and were prevented from finishing by the time limits on the road closure.

Following the epic event in 2015, at first sight the organisers seem to have chosen an easier route for 2016. Slightly longer at 146km, the route includes 700m less climbing than in 2015, at an estimated 3,800m. However, as is often the case in the mountains, the bare statistics don’t tell the whole story…

Megève to Morzine: a new variation on an old theme!

Strange to tell, but the Tour has never before started or finished in Megève. Stage 20 in 2016 sets this right by starting in Megève on Saturday July 24th, the final day before the arrival in Paris. Since it will be the last chance to challenge the leaders, the four climbs on the menu should see plenty of attacks and combative cycling before the breakneck descent to the finish in Morzine.

This will be the 16th time the Tour arrives in Morzine (the village has also seen 18 stage starts since the first one in 1975). Coming from the south, the stage follows the usual route to Morzine, over the col des Aravis, down through La Clusaz and Le Grand Bornand, over the col de la Colombière and down to Cluses. The innovation for 2016 is that, from the Colombière, instead of heading over the côte de Châtillon directly to Samoëns and the foot of the col de Joux Plane, the route forks left and makes a detour via Marignier, Mieussy and the col de la Ramaz. This adds an interesting variation and will soften up the challengers nicely before the final climb to Joux Plane…

After the start in Megève and the initial warm-up on the road down to Flumet, the route breaks down nicely into four climbs and four descents, one for each of the four cols.

The start: Megève to Flumet

Depending on the exact position of the start line in Megève, there will be between 9 and 10km of false flat descent (-2.3%) before Flumet and the start of the col des Aravis. These first few kilometres will be very fast, with the leaders exceeding 50km/h for much of the time…

The arrival in Flumet is tricky. After crossing a bridge, the road winds through a narrow gorge, with a rock face to the right, a parapet to the left and a dark but mercifully short tunnel to negotiate before a sharp right hand turn in Flumet. Too bad you won’t have time to admire the magnificent 19th century bridge spanning the gorge to your left!

The road to the col des Aravis starts in the village of Flumet and is initially moderate, averaging almost 6% for the first kilometre and a half. It then flattens out considerably through the forest and even descends for a kilometre or so before rising again. This section is always deep in the shade and often damp. It will be cool in the early morning: if hot weather is forecast, enjoy the coolness while it lasts!

The climb starts in earnest a little before the village of La Giettaz. The false flat steepens imperceptibly until you suddenly find yourself at 7%. Beware the temptation to go too fast, there is a long way to go to Morzine. This is the time to throttle back and settle into an easy tempo that you can hold all day.

From this point on there is little respite, the grade varying between 5% and 8% most of the way to the summit, with a short section at 9% and another much easier at 3.5%. The road winds up between farms, chalets and orchards, with frequent hairpin bends.

The last kilometre is particularly impressive as the road winds steeply back and forth up and over the lip of the pass before finally easing off towards the summit.

Once past the incongruous display of cowhides outside the souvenir shops you are on to the descent. It is an absolute delight on this side, with great visibility through the wide open sweeping bends inviting you to descend fast. Be careful, some of the bends tighten unexpectedly.

The descent continues through the villages of La Clusaz (where Alpine Cols is based) and Saint-Jean de Sixt. You will finally reach the bottom after 12km of descending just before the village of Le Grand Bornand, start of the next climb.

The col de la Colombière has a fearsome reputation, but that is from the other side. Starting from Le Grand Bornand the climb is relatively easy, without much variation in gradient until the final kilometre.

After a first switchback in the village, the road heads straight up the valley. It switches back and forth again 5 or 6 times through chalets and pasture before flattening out slightly in the village of Chinaillon. Now approaching the head of the valley, you will need to make a final effort to get up and over the col, especially during the last kilometre at 9%.The road curves around, hairpins again and climbs steeply to the summit in front of impressive rocky cliffs. You are unlikely to see them, but these cliffs are inhabited by a large herd of mountain ibex. Perhaps a good reason to come back!

The first part of the descent from the Colombière is steep, narrow, fast and dangerous. What more can I say? The gradient is -11% and the road snakes down with a rock face to your left and a low parapet and steep drop-off to your right. Your descending skills will be crucial, not for the last time on this route.

After 3km the slope eases to -8%, but the descent remains very fast through a series of hairpins to the village of Reposoir. Things calm down here for a while, with 3km of false flat descent before the final 6km through the forest. Here the road is relatively straight and you can once again be hitting speeds north of 60km/h.

Make sure you get to the bottom safe and with plenty of energy, you are not even half way to Morzine yet… Managing the next 17km, across the Arve valley, through Marignier and up the false flat climb to Mieussy will be crucial to finishing well. Resist the temptation to ride fast. Make sure you re-hydrate and eat something, then get in a group and ride at endurance pace.

The climb to the col de la Ramaz officially starts at the roundabout in the village of Mieussy. From here there are 14 km to go to the col, 960m higher up. The average gradient is 6.7% but this means little because it is very irregular.

The first 2 km through the chalets and farms on the outskirts of the village are at 8%. The road then eases off to 2% for another kilometre. After a further 3km of switchbacks through the forest at a moderate gradient, the serious stuff begins. The road is now cut into the plunging hillside above the Gorges du Foron, and the gradient alternates 9%, 7%, 9% and finally 10% at the steepest section through a tunnel. The ever-changing gradient means it is hard to settle into a rhythm.

If it is a hot day you will be glad of the shade under the avalanche shelters and in the tunnel: the mountainside here is south-facing and in the full blast of the sun. The road finally levels out to a more reasonable 5% as it reaches and curves around the Sommand plateau.

There is a final kilometre at 7% to reach the col and its impressive view on Mont Blanc.

The best advice we can give you on climbing the col de la Ramaz during the Etape is: take it easy. Stay in Zone 3 and keep a steady cadence, changing gears often as the slope changes, standing up on the pedals regularly to give your thighs a break.

Once over the top, be prepared for another steep, fast and dangerous descent. There’s nothing too challenging for the first 5km, down to and through the ski village of Le-Praz-de-Lys, but you then enter a 4km section where the road descends very steeply in straight lines between sharp hairpin bends, often at -11% or more. Simply letting the bike roll without braking will see you accelerate quickly to 85km/h in the straights.

This descent will be particularly dangerous if it is wet. Think carefully before bringing carbon clincher wheels: the small potential gain on the climbs may not be worth the risk…

Once through this steep section, the remainder of the descent to Taninges is straightforward.

The 12km along the valley from Taninges to Samoëns is a false flat rise averaging less than 1%. This is your last chance to fuel up and restore your energy levels before the final and toughest challenge of the day, the climb to the col de Joux Plane.

Most of the professionals consider the climb to the col de Joux Plane from Samoëns to be the toughest in the northern Alps. A glance at the statistics soon tells you why: you have 11.6km to climb at an average gradient of 8.5%. The col de la Ramaz takes an extra 2.5km to climb 30m less…

To add to the difficulty, the whole slope faces south, making the climb potentially exhausting in the heat.

From the start to the finish it is unrelenting, practically all between 7% and 10%, with just a short 300m stretch at 5% soon after the initial 12% ramp out of Samoëns.

Most of the climb is in Alpine pastures with spectacular views as the road winds and snakes its way up. Near the top it enters a forest before opening up again with fantastic views on Mont Blanc and finally the small lake near the summit.

Unfortunately – and this is terrible if you are not expecting it – the hard work is not yet over. After a short descent around the lake you must make a final effort and climb another 70m quite steeply to cross the Col de Ranfolly before beginning the steep, exhilarating descent to Morzine. Beware cramps on this nice little kicker!

Be very careful on the descent. It will be tempting to let it go and even (why not?) try to make up a few places with free speed on this final leg. The descent is however technical and dangerous. Many of the bends, especially near the bottom, have poor visibility and tighten up unexpectedly. This is where Roberto Héras fell in 2000 while chasing Richard Virenque for the stage win: beware!

Negotiate these last few bends safely and you have only a few hundred metres left to ride before finishing the Etape du Tour. BRAVO!

Preparing for the Etape du Tour

Riding this Etape will be seriously tough. You will enjoy the experience so much more if you are properly prepared. Alpine Cols will be running several training camps in the area, all aimed at preparation for the Etape (or for other sportives such as the Haute Route).