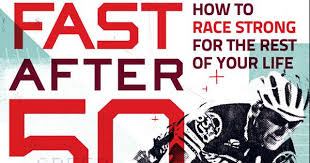 “Ageing is first and foremost an attitude. Whether you decide you’re over the hill or not, you’re right” – Joe Friel

Joe Friel is a celebrated US coach and author of numerous other books including the best-selling Training Bibles. Recently turned 70 and still competing at the highest levels himself, he has finally brought his focus to bear on the specific challenge of the ageing athlete.

In his book Fast after 50 (2015, Velopress) he reviews all the available research on the subject and adds his own considerable experience to what is likely to be the authoritative text on the subject for years to come. Joe makes it clear that while some decline is inevitable, the right sort of training can hold the decline to barely perceptible levels. High levels of performance in endurance sports such as cycling, swimming and running are still possible well into the years where most people spend their days asleep in front of the television.

Let’s look at elite performance. The fact is that the world records set by different age groups in the major endurance sports (1500m swimming, 40km cycling TT, marathon running and Ironman triathlon) show only very moderate declines until about age 75 (or 60 in the case of the Ironman).

These elite sportspeople have found a way to minimise the effects of aging. Can this apply to us as well?

To answer this, we need to understand a little about exercise physiology and the ageing process. It is a fact that as you get older, your athletic performance will inevitably decline. The three most likely reasons for this are:

The usual advice from the medical community has been to accept this gracefully and slow down. Most doctors are aware of the considerable amount of research suggesting that exercise, regardless of intensity, can lead both to a long life and to a better quality of life. However, the majority also apply the principle of prudence, and thus advise you to avoid strenuous exercise, don’t take any risks and take it nice and easy.

The result of this well-meaning advice is that the decline in your athletic performance will accelerate and become much greater than it need be.

Joe Friel sets out the alternative, research-based approach that has been shown to slow and in some cases even temporarily reverse the decline. Contrary to popular conceptions, the key is not in doing many hours of low-intensity training. The key is in maintaining the right dose of high-intensity training.

The reason seems to be that there is a sort of “use it or lose it” process going on, and if you stop subjecting your muscles to high-intensity exercise, they reduce in size and capacity. In other words, the primary reason for muscles shrinking as you get older is most likely lack of use!

So what type of training works best for the older athlete?

When designing a training plan, there are only three parameters to play with for each specific session:

Duration multiplied by frequency gives you your training volume.

Friel’s advice for older athletes is to mix an “individually reasonable amount of moderate-effort volume along with some high-intensity training”.

So what does this mean, and what sort of high-intensity training are we talking about?

Aerobic capacity* (VO2max) is believed to be the most important determinant of performance as we age. Therefore, high-intensity workouts focused on improving or maintaining VO2max are the best way to keep riding fast. According to Friel, it is unwise to exercise at intensities higher than your VO2max level, mainly due to the risk of injury.

However, if you ignore the volume aspect and do only short, high-intensity workouts at VO2max, you will not be able to go the distance in the longer endurance events such as the Etape, the Marmotte or the Haute Route. It is thus important to find what Friel calls the “Goldilocks volume”, just right for you.

Your optimum training plan will take into account this target volume, adjusted for each period and dosed with the right level of intensity. The periodic structure recommended by Friel remains the same as for younger athletes, but he introduces an interesting twist for the older athlete. Instead of using a 7-day week as the basic unit, build your plan on the basis of a 9-day week. This won’t work for everyone obviously but anyone with a sufficiently flexible agenda should consider it. The problem with a 7-day week as you get older is that there may not be enough time to recover from each of the training sessions, especially during the Build period. The advantage of a 9-day week is that you can fit in all the required sessions and still have enough time to recover before the next block.

Recovery is particularly important for the older athlete. You may be able to complete a workout that is just as hard as one you did ten or twenty years ago, but you are unlikely to be able to repeat it the following day. If you try, you run the risk of overtraining and injury, which in extreme cases can be career-ending. Friel recommends that, especially if you haven’t done any high-intensity training for a while, you should take a long-term, gradual approach to re-introducing it.

Friel also emphasises the importance of strength training, particularly during the Preparation and Early Base periods, covering roughly the first third of your plan, but also at a maintenance level throughout, excepting Race Week. He maintains that it is possible to increase your strength at any age, so long as you use the appropriate weights, technique, duration and frequency.

The book also includes chapters on Rest & Recovery and Body Fat. Friel has some very interesting things to say about nutrition and particularly the potential gains from a low-carb, high-fat diet (such as proposed by Dr. Timothy Noakes, author of The Lore of Running) but I will keep these subjects for a future article.

“You aren’t old until age becomes your excuse” – Joe Friel

* Aerobic capacity is the measure of how much oxygen you use when exercising at a maximal load for approximately five minutes.

Alpine Cols was the official Coaching Partner to the Haute Route for the 4-year period 2014-2017. We also work with many people preparing for other challenging sportives, such as the Marmotte. Please contact us if you would like to discuss coaching with us.

An interesting and very readable review, Marvin. In the opening quote, did you mean to say “Ageing is first and foremost an attitude”?

I want to read this book!

Thanks Stuart for pointing out the typo! Now fixed 😉