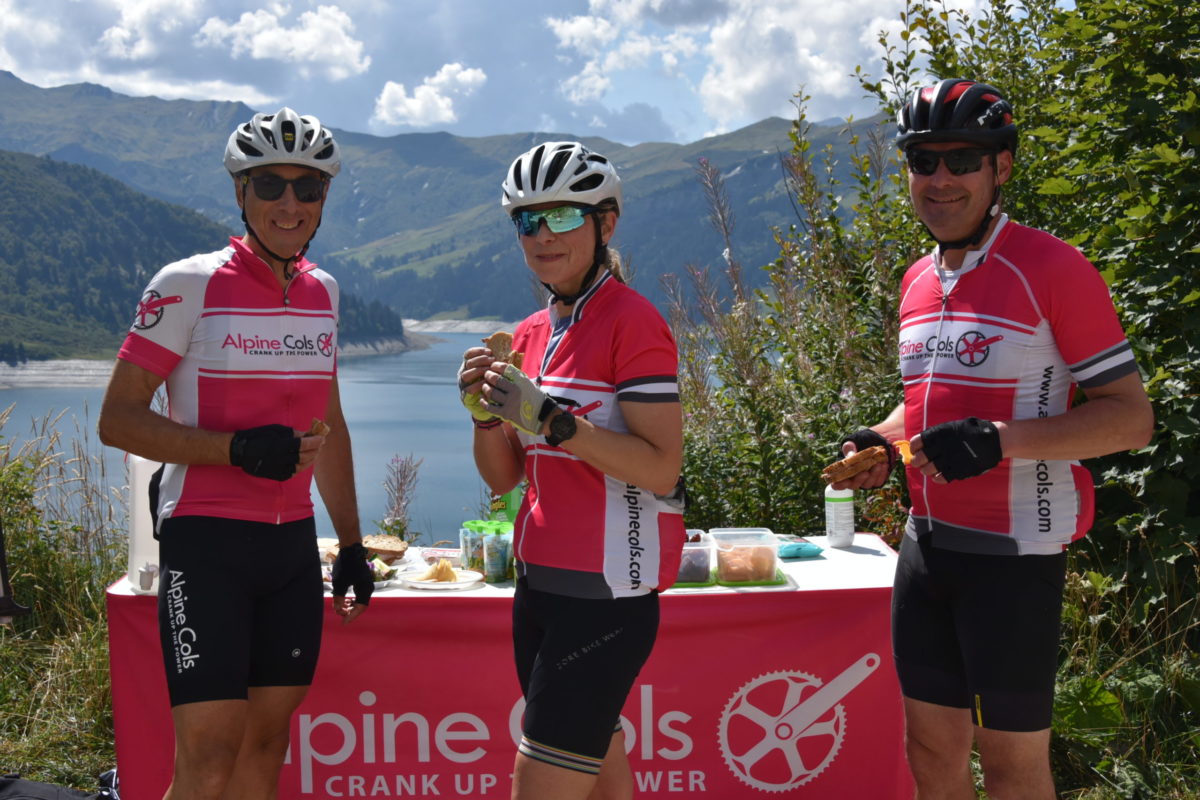 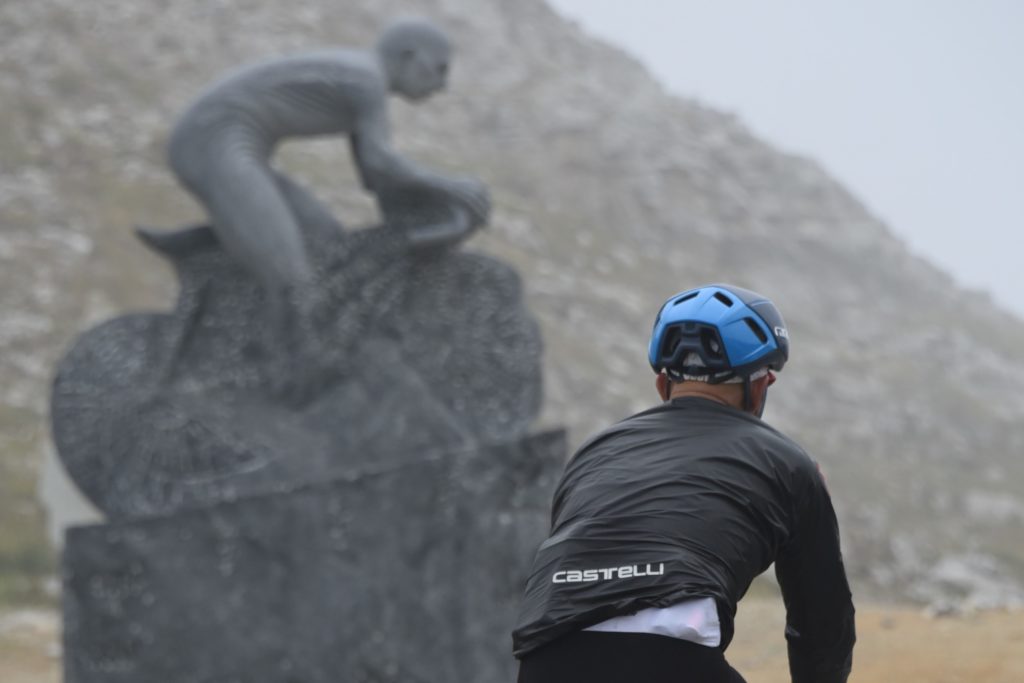 After a pandemic-enforced cancellation in 2020, our inaugural cycling tour from Geneva to SanRemo finally took place in September 2021. And what a tour it was! It’s hard to pick one single highlight, from a stunning lunch above the Roselend lake, crossing the col de l’Iséran, entering Italy over the col du Mont Cenis, a fabulous meal in Saluzzo, conquering the amazing Colle della Fauniera or finally arriving in SanRemo over the Cipressa and Poggio climbs, so familiar from Milan-SanRemo!

The conclusion: this was an excellent alternative to the better-known Route des Grandes Alpes, combining the best of France and Italy in the same trip.

As the old adage reminds us: “start as you mean to go on”… The first climb, to the col des Aravis, began immediately we left the hotel, with much clicking of derailleurs as we settled into the rhythm of a steady ride up through the wooden chalets and alpine pastures above the village. We took the mandatory group photo on the first summit of the week before launching (prudently) into the first descent. The hairpins come thick and fast before the mid-way point in La Giettaz… 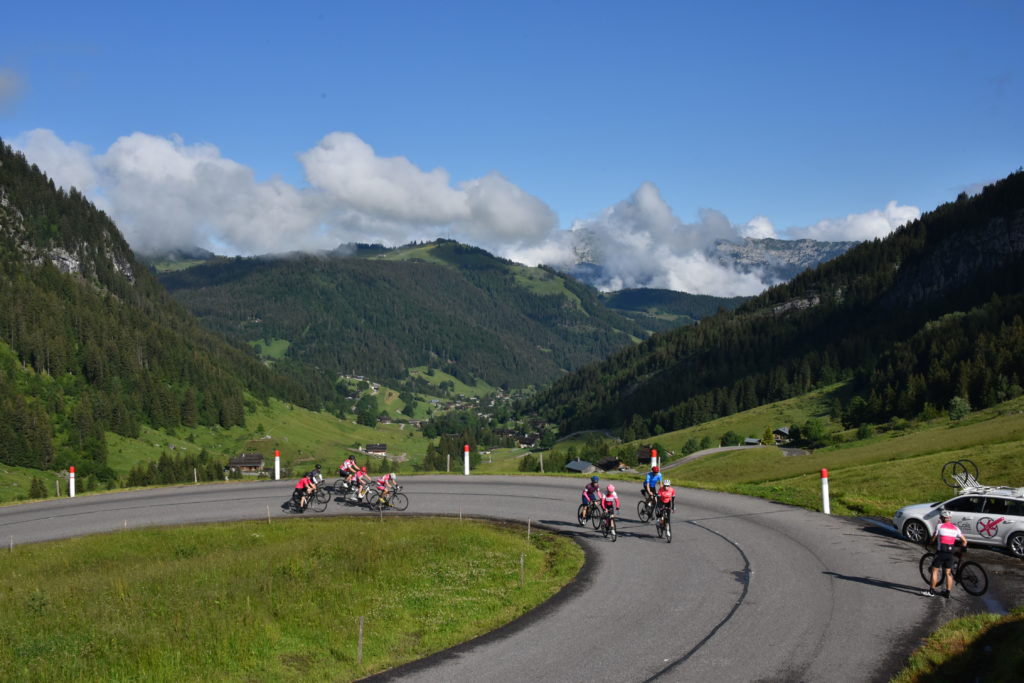 Next to come was the col des Saisies, followed immediately by the Cormet de Roselend. All three of these Stage 1 climbs are perennial favourites on the Tour de France (not to mention on Alpine Cols training camps) and are climbed by thousands of cyclists every summer. 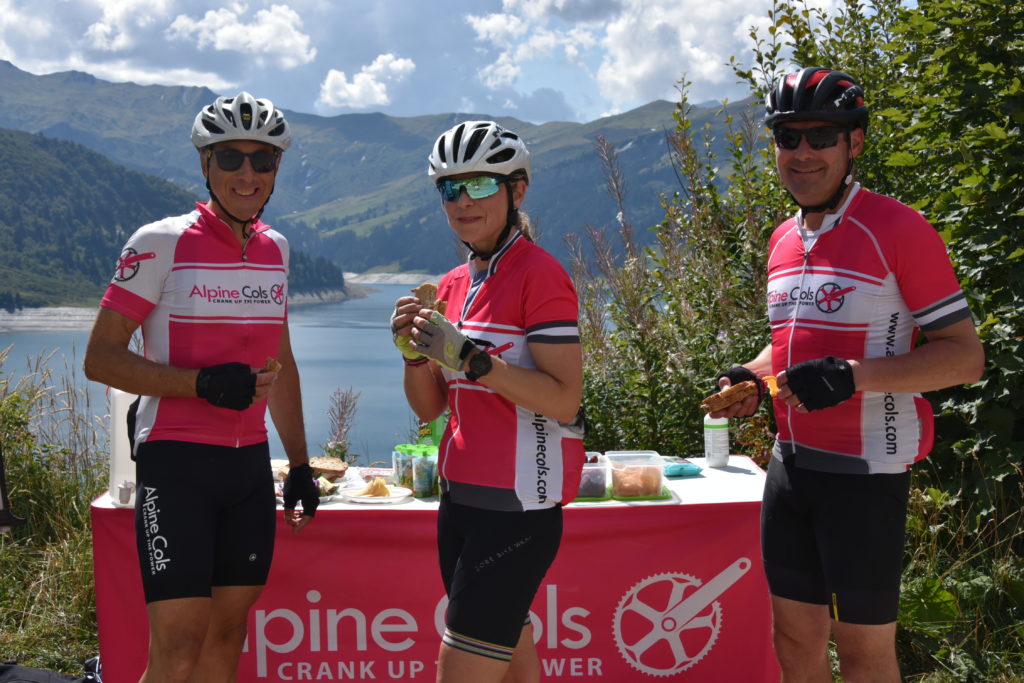 The highlight of the day was undoubtedly our lunch stop above the Roselend lake, one of the most beautiful spots in the Alps. After enjoying Franck’s wonderful sandwiches, it was but a short climb to the Cormet, before a long, exhilarating descent to Bourg Saint Maurice – with a brief pause to admire the parapet where Johan Bruyneel made his famous dive into the ravine in 1996. Cake, apple tart and massages were on the menu at the hotel, before a well-earned dinner and an early night.

Only two climbs today, but the first one took us via almost 40km of continuous climbing to the highest paved pass in Europe, the col de l’Iséran (2,770m). The long slog up the main road to Val d’Isère was punctuated by a welcome diversion off the main road near the dam below Tignes. The traffic thinned out as we left Val d’Isère behind us, and the air felt more and more rarefied as we neared the summit, our huffing and puffing punctuated by the cries of marmots watching us from a safe distance. 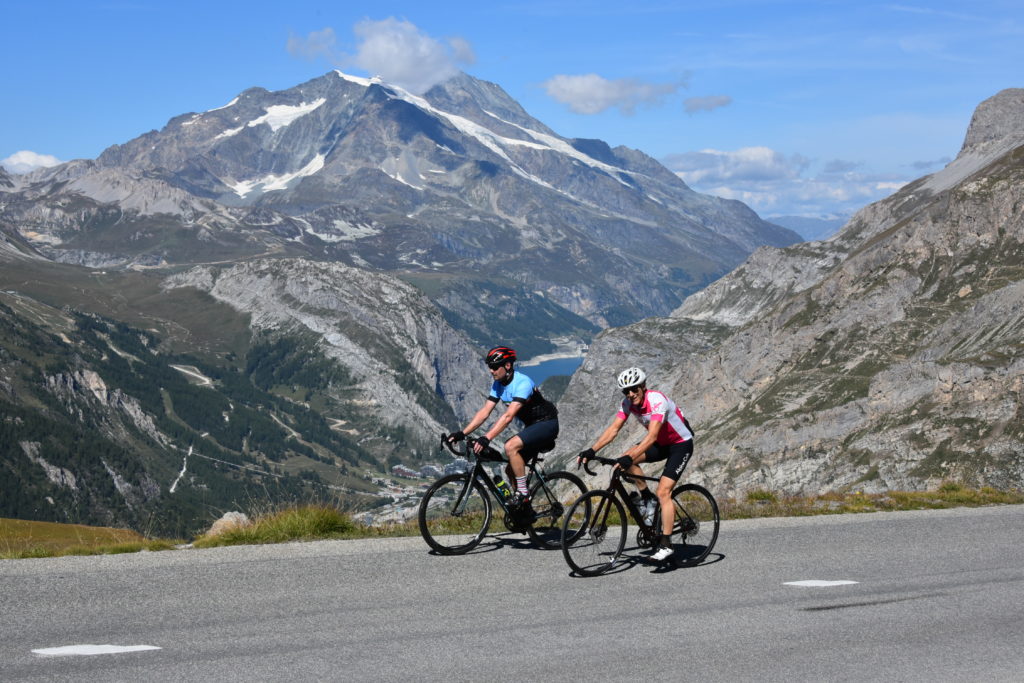 Once over the top we enjoyed 15km of high-speed descending before reaching the valley, where a headwind made us work together to reach our lunch stop in Lanslevillard. We picnicked on local bread, ham, cheese and bananas by the side of the river before starting the final climb of the day, to the col du Mont Cenis. The road up is wide and never steep, but every switchback brought a change in wind direction and it took an effort to finish the final straight into a strong headwind. 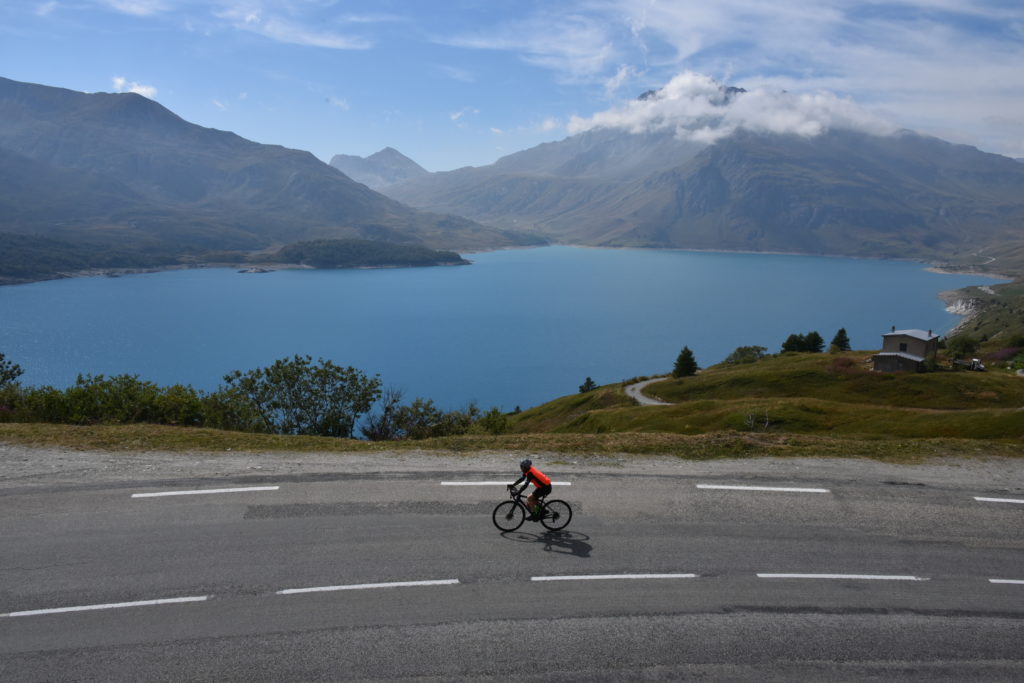 The Mont Cenis lake (1,974m) was a beautiful sight in the sun. We made the most of the views before crossing the frontier and plunging down the final descent on a perfect road to our hotel in Susa, a converted convent next to a Roman amphitheatre. This being Italy, dinner was pasta and pizza enjoyed on an outside terrace.

The original plan for Stage 3 was to climb the colle delle Finestre, where Chris Froome won the Giro in 2018 with a remarkable solo effort. Unfortunately the final 8km of gravel road leading to the col have not been graded since and we received word that the climb was almost unrideable on road bikes. Fortunately there’s an excellent alternative via the col de Sestrière, and it would be fair to say that not everybody was disappointed! 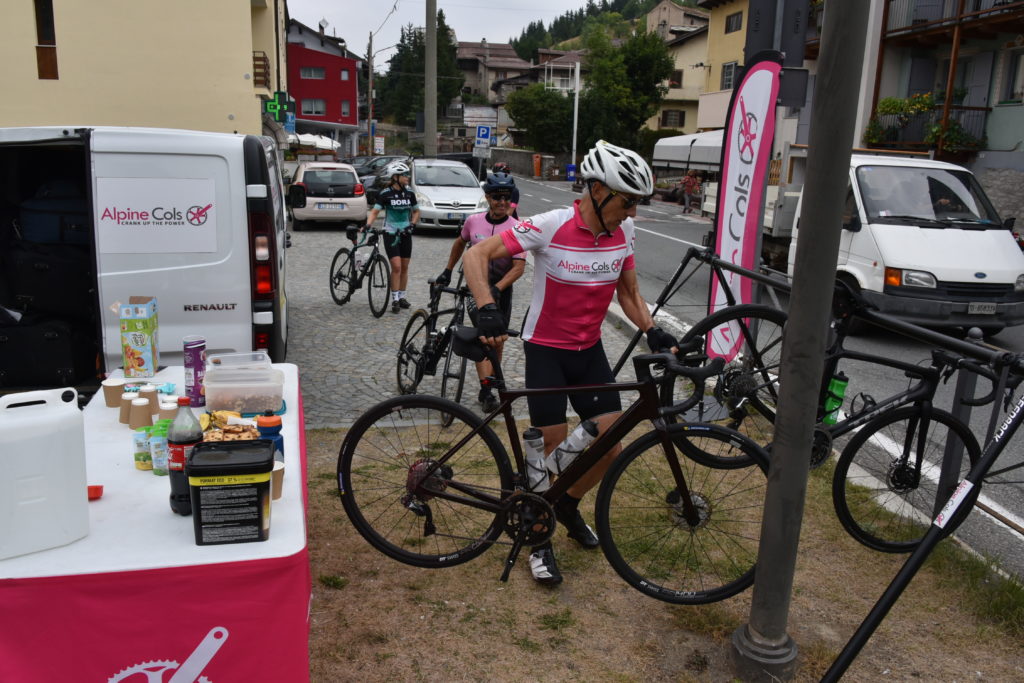 It’s a long, mostly false flat climb up the valley to Cesana Torinese where the real climb begins, but the road is excellent and has little traffic. The strain was starting to tell for those whose last trip to the mountains was pre-pandemic (remember those days?), so it was with considerable relief that we reached the summit and started the long descent. From here we had over 100km to ride to Saluzzo, amazingly nearly all in descent. We could have stayed on the main road, but it was far more fun to divert to quiet side roads and dive through tiny villages on the way.

Saluzzo is a delightful historic town. Our restaurant in the medieval centre was quite exceptional, with outstanding food and some of the best service I have ever experienced. A true highlight!

This was the Queen stage, with two massive climbs planned over the colle di Sampeyre and the colle della Fauniera. Each of these climbs is a serious challenge on its own, and doing both would have amounted to 4,000m of climbing. Some of the group would have made it, some probably not, so it was by common agreement that we shortened the stage to “just” the Fauniera. This much-feared climb is the centre-piece of the Granfondo Fausto Coppi, which starts and finishes in Cuneo. 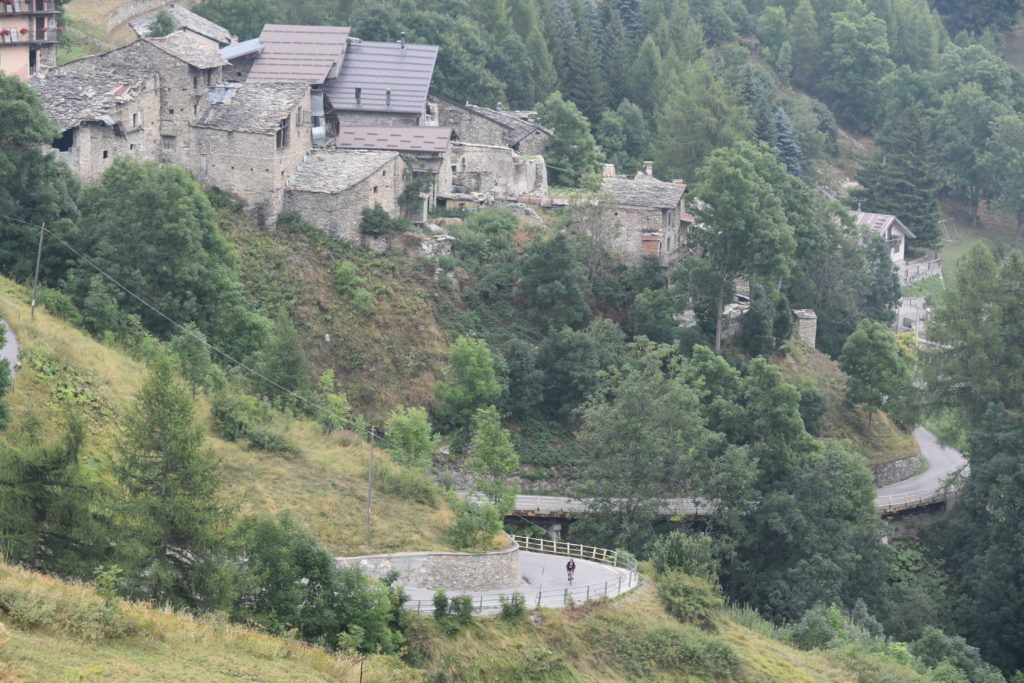 It’s a little hard to tell where the climb starts, because in reality you start climbing from the moment you quit the flat plains and begin up the valley. The valley is sparsely populated and we followed a delightful road winding up above the river for kilometre after kilometre, with almost no traffic. The hard work began in Castelmagno and from here on the gradient rarely dropped below 10%. We climbed slowly, steadily, on an increasingly narrow and broken road. The skies were overcast and we entered the clouds with 3km to go. Startled marmots scurried away in front of us, and we could but guess at the stunning views on a clear day. 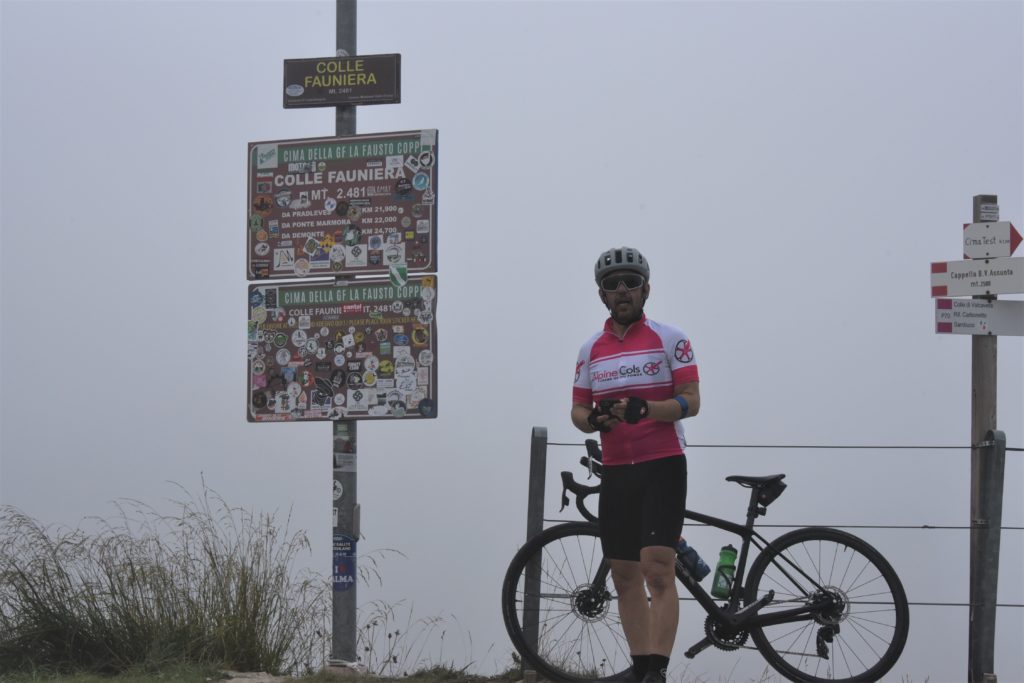 We were very glad to see Franck waiting on the col for us with our warm clothes and something to eat. Having climbed so high, there was a huge descent to come. Rarely have I so much enjoyed the feeling of rising temperatures as we lost altitude, nor the coffee stop 20km down!

We stayed in a palazzo in the historic centre of Cuneo, a remarkable city with impressive colonnades and arcades shading cafés, pasticcerias (selling pastries and cakes) and tempting shops. There was just time to enjoy it briefly before we took to the road again, this time for a relatively easy stage – it would be stretching it to call it a recovery ride – to Garessio. 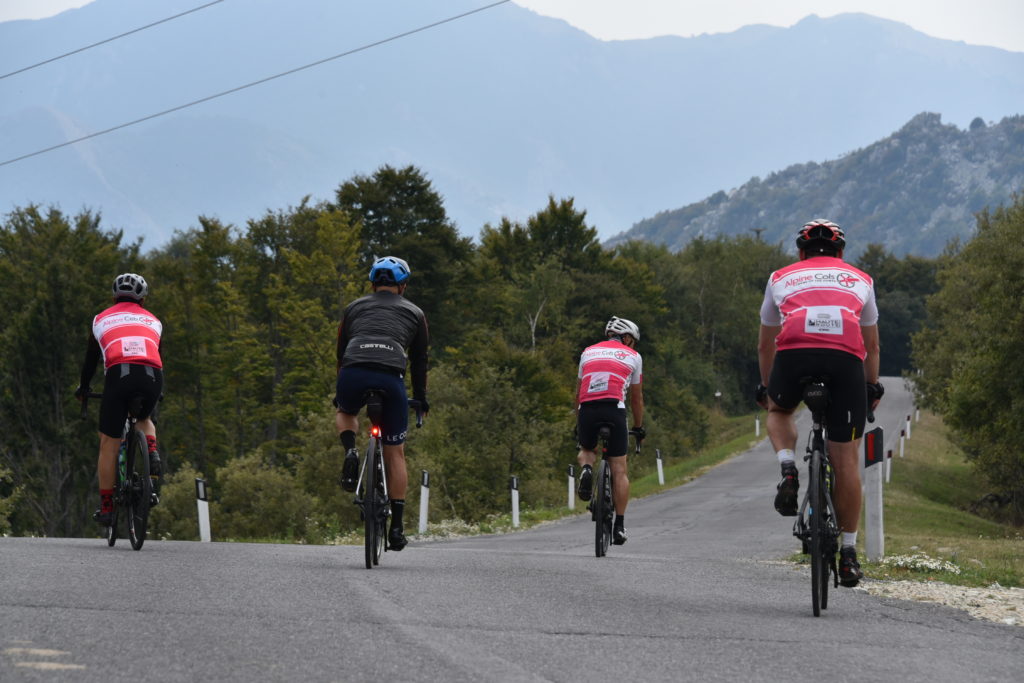 Garessio is in the heart of the Ligurian Alps, which were the final barrier between us and the Mediterranean. Our route took us over four progressively longer and higher climbs to get there, via San Giacomo and the colle di Casotto. Once again the roads were beautiful, quiet and almost traffic-free, and also in excellent condition.

Our lodgings for the night were in the old town of Garessio, close to the remarkable church of Saint Mary of the Assumption, one of several historic churches in the town. In medieval times Garessio was both an important staging post for the salt trade and a major religious centre: the Dominican friar Prieras, chief Inquisitor against Luther (early 16th century) came from Garessio. 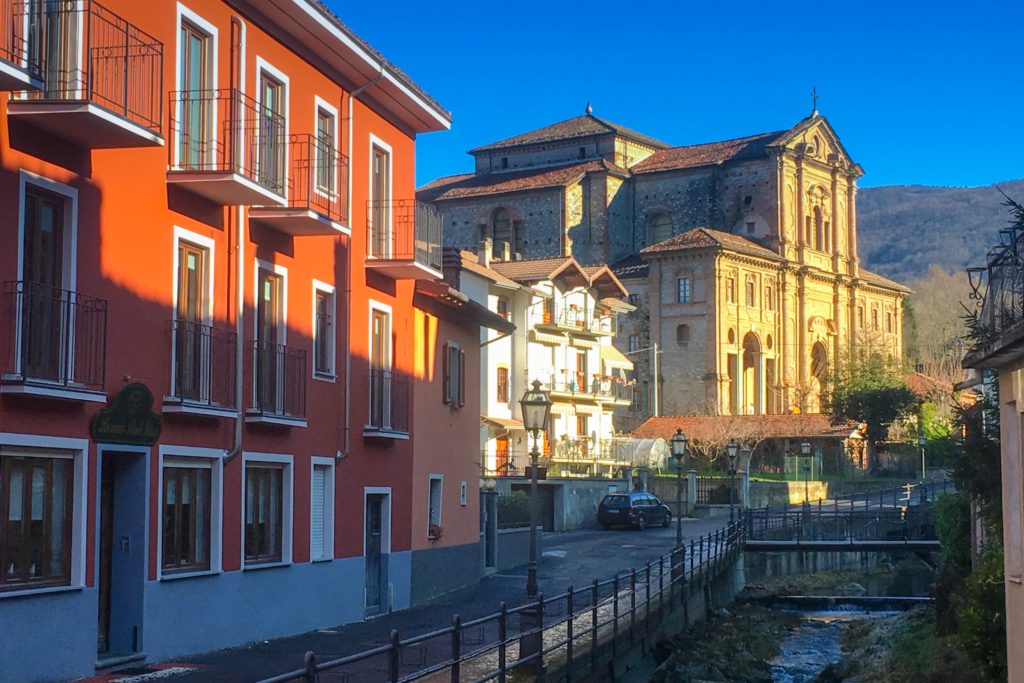 Happily, the religious arguments of the Reformation were far from our concerns as we enjoyed our drinks in the evening sun, followed by an excellent dinner!

As always on a trip such as this, the final day is a bitter-sweet highlight as we both reach our destination and realise it is all over. But first we had to get there… The 6km climb to the colle San Barnado began immediately. Tired legs soon found the necessary rhythm and before long we began the long descent to the sea at Albenga. 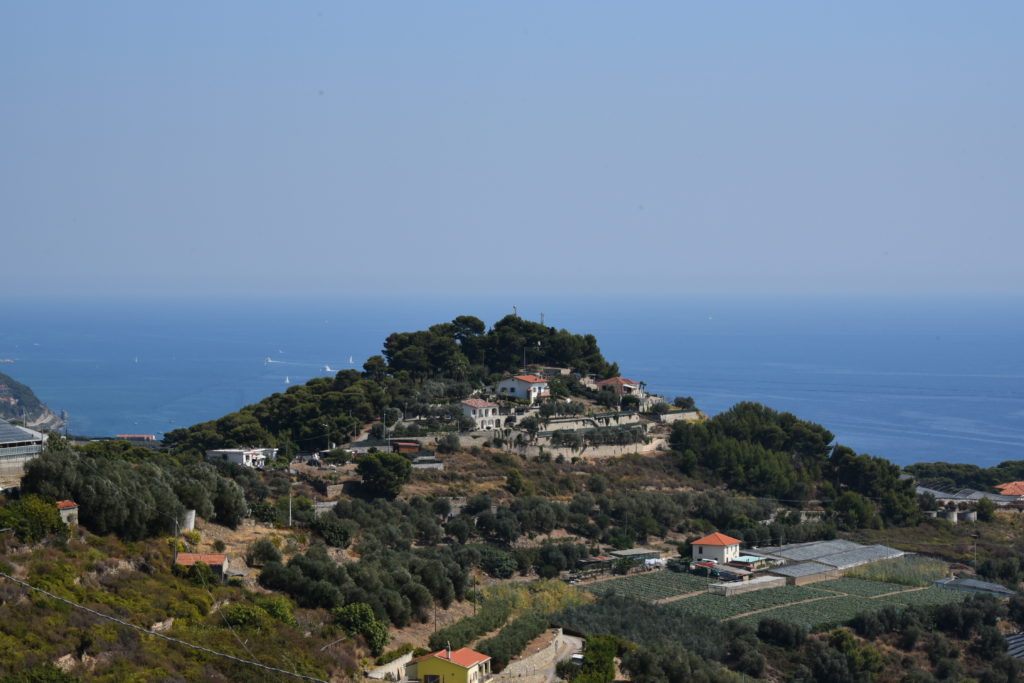 From here we followed the coastal road for the last 64km of the famous Spring Classic Milan-SanRemo. We cycled up and down and in and out of the many inlets and headlands along the way, always with a view on the sea to our left. We approached the Cipressa with mounting excitement, imaging how the pros must feel at this point in the race. The climb itself is nothing compared to the alpine giants we crossed earlier in the week, but is certainly enough to provide a challenge to the pure sprinters after riding hard all the way from Milan. It would be fair to say that none of us challenged the Strava segment leader board. 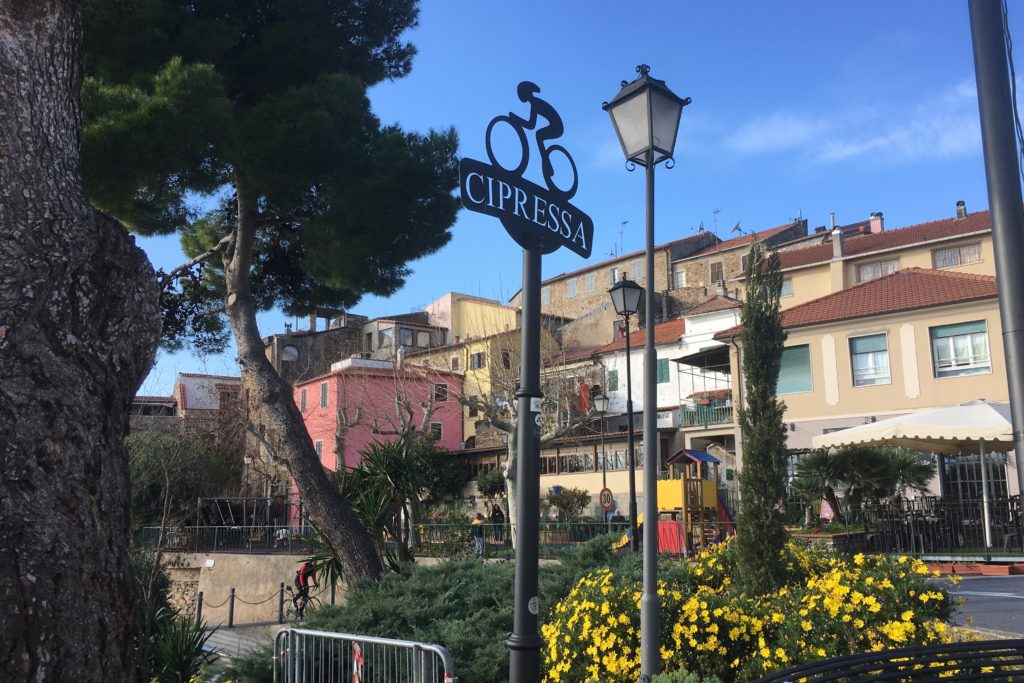 The traffic on the coast road is heavy, even in September, so it was a relief when we could take the cycle path after descending from the Cipressa. Built on a disused railway line this path runs for 30km or so from Santo Stefano west to Ventimiglia and the border with France, and is the perfect way to cycle along the coast. 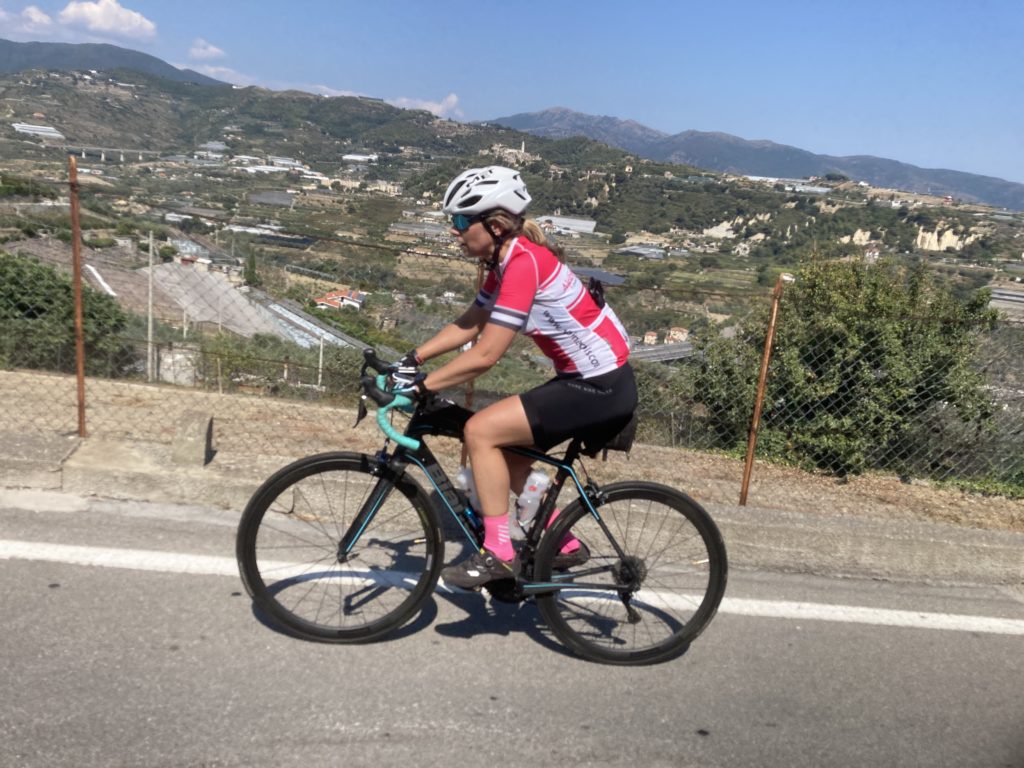 The final climb, the famous Poggio, starts less than 8km from the finish and is only 3.6km at 4%. The most impressive part is the descent, which includes several tight hairpins and is always taken at breakneck speed by the pros, desperate to be well-placed for the final straight and the sprint finish.

Needless to say, there was too much traffic for us to sprint so instead we took the bike path directly to a strategically-placed bar overlooking the port…

Counting down the days, till we meet again !

We too Larry! It was great to have you with us.