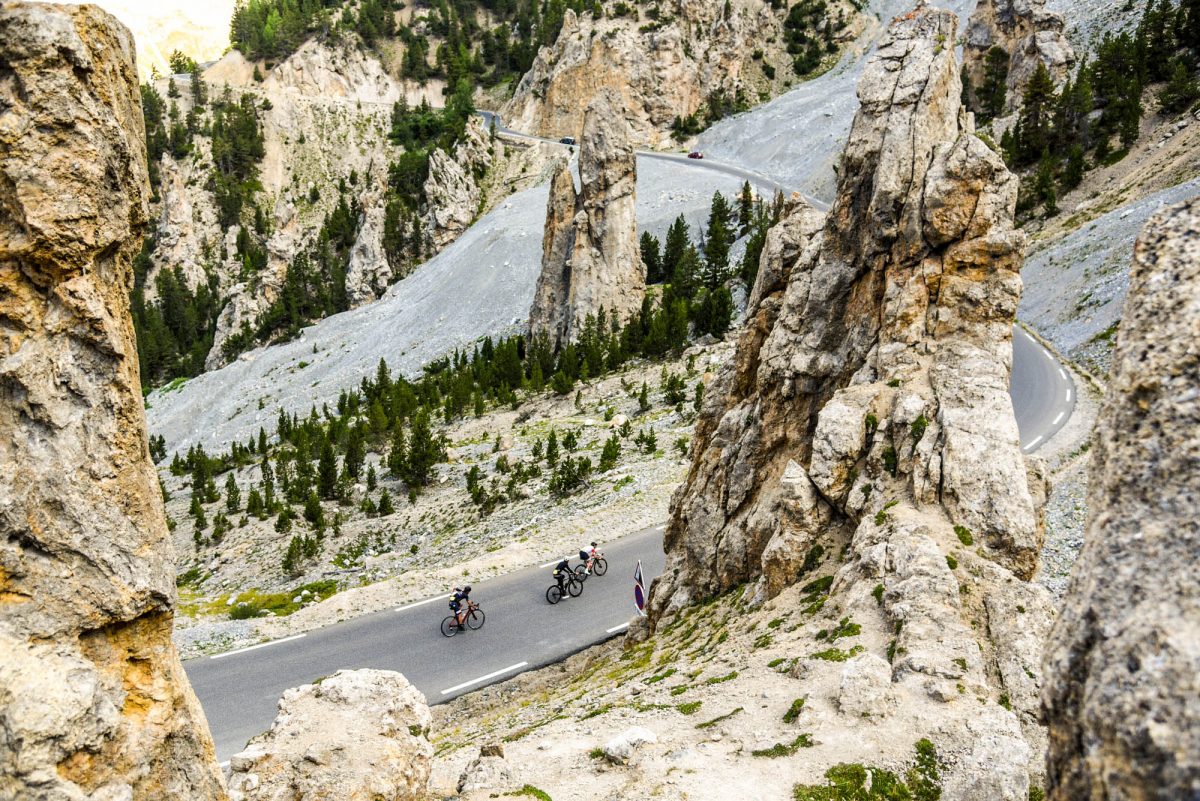 Few Alpine cols are more mythic than the Izoard.

First immortalised in grainy black and white photographs as a backdrop to the exploits of cycling’s early heroes, the extraordinary scenery of the Casse Déserte is a photographer’s dream come true. Much higher up, wilder and more grandiose than Alpe d’Huez (which, if we are honest, is no more than 21 bends culminating in a ski village), the col d’Izoard outdoes even the mighty Galibier and Mont Ventoux for the sheer majesty of its breath-taking scenery. There is no other col quite like it in Europe.

Most of the passes near the Italian border were of strategic significance in times past, and the col d’Izoard is no exception, dominating the southern access to the fortress town of Briançon. The first road was constructed in 1710, and the current one was built between 1893 and 1897 by an army General, Henry Berge.

The summit is at 2361m, making it the fifth highest pass in the French Alps, after the Iséran, Agnel, Bonnette and Galibier. The 2015 Haute Route riders will tackle it from the southern, harder side during the second stage, from Auron to Briançon. The total climb from the lowest point near the village of Guillestre to the summit is 1380m, and the distance 31.5km. It is the last 14km however that justify the Izoard’s reputation.

The col d’Izoard first figured in the Tour de France in 1922, when Philippe Thys, winner in 1913, 1914 and 1920, was the first over the summit. Its legend was soon established by Henri Desgranges, who wrote at the time: “The task is so hard that our men gave up all thoughts of competing with each other until the arrival… they sensed that above all they had to survive and to finish, and that faced with such a challenge, so much suffering, it would perhaps be a consolation to do so in the company of others.”

Desgranges wrote again in 1923: “The Izoard is interminable… just when you think you have mastered it, at the exact moment when you are about to let out a sigh of relief, it throws up a new rise that would stop a mule in its tracks”.

Remember, his main objective was to sell newspapers!

The Izoard has been used a further 33 times in the Tour since 1922, most recently in 2014, when the Spanish climber Joaquim Rodriguez was the first over, adding his name to a list of the most famous climbers in the history of the Tour. Gino Bartali, Jean Robic, Louison Bobet, Fausto Coppi and Federico Bahamontes were all first to reach the summit – in Bobet’s case 3 times – as were Eddy Merckx, Bernard Thévenet and Lucien van Impe.

In the early days the Izoard was seen as a platform for victory, and a real champion was supposed to cross the rocky summit alone. Raphaël Geminiani, who was second overall to Hugo Koblet in 1951 and later became Jacques Anquetil’s Directeur sportif, said of the Izoard: “The Tour must first be won in Briançon before being won in Paris”, and Jacques Goddet, director of the Tour from 1936 to 1986, said: “The Izoard has the privilege of revealing the champion.”

Who can forget that the Izoard was the scene of regicide, when “King Eddy” was at last deposed after so many years of outrageous domination? On the 16th stage in 1975, Bernard Thévenet attacked three times on the early slopes of the col, before finally breaking away from the group including Merckx, Van Impe, Gimondi and Romero. He soon caught and overtook Zoetemelk and crossed the summit with 2’25” in hand, finishing alone in Serre-Chevalier (2’22”). Merckx never gave up, but Thévenet had won the Tour on the Izoard.

In spite of its illustrious history, the organisers chose to ignore the Izoard for many years. It was only used twice in the 1980’s, once in the 1990’s and three times in the 2000’s.

It fell to Andy Schleck to revive the legend in 2011, when he attacked at 60km from the finish on the 18th stage between Pinerolo and Serre-Chevalier. Fourth that morning, 2’36” behind Thomas Voeckler, he displayed great panache in climbing the Izoard alone, in spite of a strong headwind. He crossed the summit with an advance of 2’15” on the yellow jersey. Linking up with his team-mate Maxime Montfort, he became virtual leader with an advance of 4’25”, but was unable to maintain the advantage on the Galibier when Cadel Evans increased the pace. He nevertheless won the stage solo, 2’07” ahead of his brother Franck. Voeckler kept the yellow jersey for 15”. Evans avoided losing the Tour, and Andy Schleck entered into the legend of the Izoard…

Climbing the Izoard, especially from the south, you will thus be riding in the wheels of many of cycling greatest names. Rest assured, you can expect to suffer as much as they did!

The approach up the valley from Guillestre is likely to be hot. You will have already ridden 100km and done two massive climbs, the col de la Bonnette (2715m) and the col de Vars (2109m), so it will be essential to treat the Izoard with respect and take the time to eat and drink during the long descent from the col de Vars and the early part of the climb to the Izoard.

From Guillestre you have an easy climb for the first 18km. Apart from one switchback at 5%, you are on a false flat, varying around 2%-3% until the village of Arvieux. Don’t be tempted to ride this at a high pace, you will soon regret it…

The hard work begins in Arvieux, where the slope ramps up to an average of 8%. Just to make things easier the road is straight and seems never-ending. If it is a hot day, the sun will be beating down on your back as you reach the toughest part of the climb, a ramp of 12% in Brunissard. At the exit of the village the road changes and climbs at last in a series of hairpins, where you can get some relief on the outside of the bends. The climb goes up for 4km through a pine forest, the slope varying between 9% and 11%.

There’s a 500m descent before the final 2km at 9%. You come out of the forest to be confronted by the amazing sight of the Casse Déserte, a lunar landscape which comes straight out of a Western. You expect to see John Wayne sliding down the scree on a horse… The peculiar rock formations are the result of millennia of geological upheaval and weathering of the limestone. The lack of trees means there is often quite a strong headwind to add to the difficulty, so keep a little energy in reserve.

The timed section of the second stage of the Haute Route Alps 2015 will finish at the summit, where you will be able to relax and re-hydrate yourself before the untimed descent to the arrival village in Briançon.