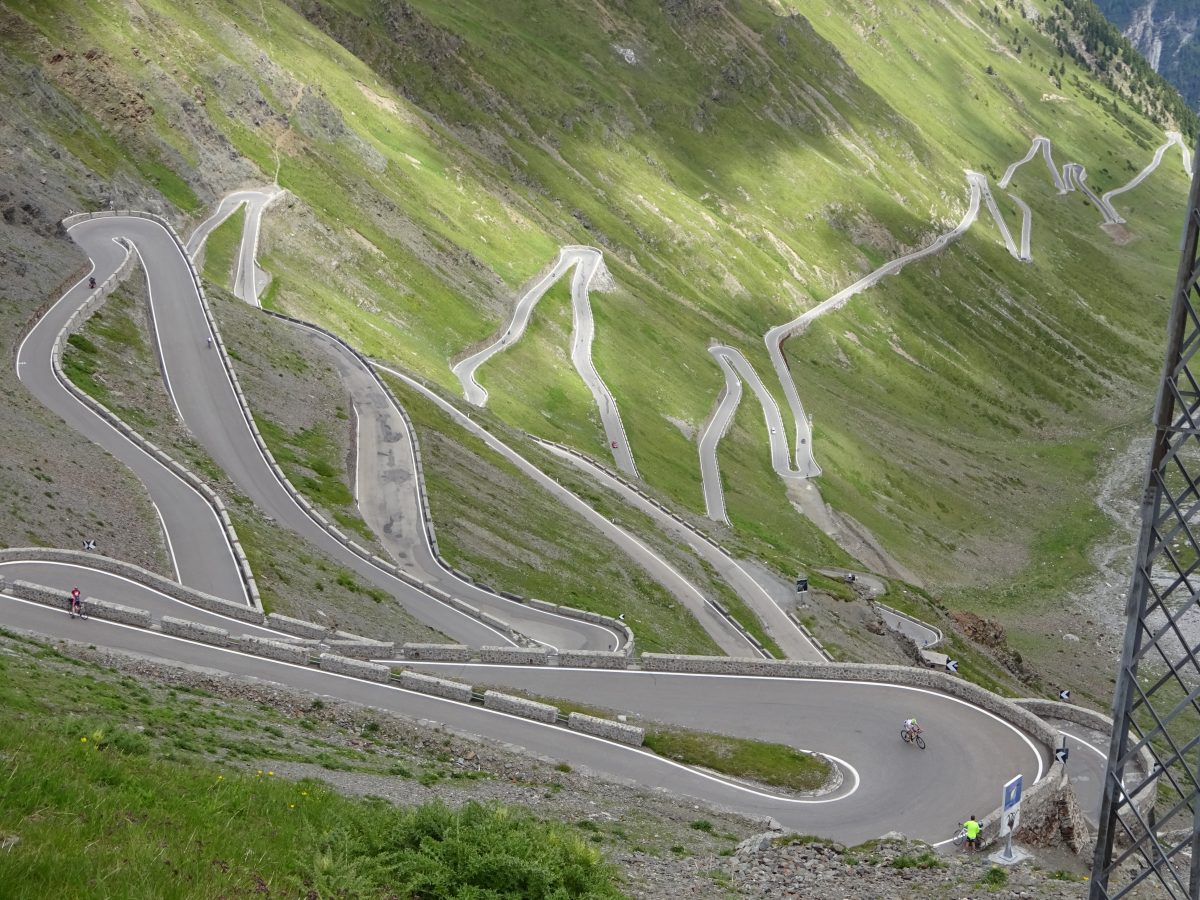 Is the Passo dello Stelvio the most iconic climb of them all?

Why do some climbs become iconic while others languish in obscurity?

The Stelvio is probably the most photographed and the most instantly recognisable climb in the world. The second highest paved pass in Europe, at 2,757m it is just 12m lower than the col de l’Iseran, in France. Even if you start from the easier side you will have to climb almost 1,600m in 22km, at an average gradient of 7.1%. What’s more, there is a ski station on the summit and it often snows, even in mid-summer!

It is safe to say that, no matter how hard it is, a climb only becomes iconic if it has been the scene of dramatic events. The older the events the stronger the icon: somehow the grainy black and white exploits of Fausto Coppi, Charly Gaul, Eddy Merckz and Roger de Vlaeminck resonate more than those of today’s riders, who will have to wait for decades to see if their own exploits pass the test of time and enter into legend.

The challenge presented by the climb itself is a necessary but not sufficient condition. The fact is that, objectively speaking, many other climbs are as tough as or tougher than the Stelvio, but they are completely unknown because nothing newsworthy has ever taken place on their slopes.

The 21 bends of the climb to l’Alpe d’Huez provide a salutary example in this regard. Only 13.2km long, with a total rise of 1,071m, the climb is clearly much easier than the Stelvio and dozens of lesser-known climbs. It has achieved its iconic status because it is invariably a summit finish at the end of a long Tour de France stage, creating the ideal conditions for sporting drama. Frequency counts too: since it was first included in 1952, l’Alpe d’Huez has seen 28 summit finishes. It was climbed twice in 2013 and will figure once again on the final stage before Paris on 25 July 2015.

The Stelvio was first used in the Giro d’Italia in 1953, the year after l’Alpe d’Huez appeared in the Tour de France. It has now been used 12 times, including four summit finishes, most recently in 2012. In 1975 the Stelvio was even the finish line of the final stage of that year’s Giro, when the stage was won by Spain’s Francisco Galdos and the Giro by Italy’s Fausto Bertoglio.

That the Stelvio has become iconic with just 12 appearances in the Giro testifies to the legendary nature of the events that have taken place on its slopes. The Stelvio began creating legends from its very first appearance, in 1953. The great Hugo Koblet was in the leader’s jersey for 12 stages in a row, from Stage 8 until Stage 20. From Bolzano to Bormio, crossing the Passo dello Stelvio, this was the first time the Giro had ever been so high. Koblet was an excellent climber and everyone expected him to keep his lead. This was to reckon without the Campionissimo, or Champion of Champions. Coppi attacked Koblet 11km from the summit on the then unmade road and rode into history by winning the Giro for the fifth time. Coppi’s comment on reaching the summit was: “in the last few bends, I thought I was going to die”.

The Stelvio’s status, however, stems as much from the epic weather conditions often experienced during the Giro as from the racing itself. It is by no means unusual to experience snow on the summit in mid-summer, let alone in May, and, just as Koppi and Koblet did in 1953, the riders often climb on the road cut deeply through high banks of snow. The uncertain weather in May probably explains why the pass has been used so infrequently, and indeed the organisers have cancelled the passage over the Stelvio no less than four times due to weather conditions, perhaps most famously in 1984…

In the 1984 Giro, the great French cyclist Laurent Fignon was counting on the Stelvio to deliver the coup de grace to his rival, Francesco Moser. The organisers claimed there was snow on the summit to justify eliminating the Stelvio. Curiously, the French journalists who drove over the pass found no snow at all… Not content with this, during the final time-trial the organisers had the helicopter fly just in front of Fignon, creating a strong backdraft which almost certainly cost him the victory and reinforced the Giro’s reputation for supporting their own. Nothing else will satisfy the tifosi!

Bad weather on the Stelvio was once again a source of controversy during the 2014 Giro, when Nairo Quintana took advantage of ambiguous communication from the race organisers to gain time on the descent while his main rivals believed it to be neutralised… Quintana built an unassailable lead and took the pink jersey all the way to Milan.

So what can the 2015 Haute Route riders expect from the inclusion of the Stelvio in Stage 4 in the Dolomites?

After leaving Saint Moritz, the riders will cross the Passo del Bernina (2330m) followed in quick succession by the Forcola di Livigno (2315m), the Passo d’Eira (2208m), the village of Trepalle, Italy’s highest inhabited village and finally the Passo di Foscagno (2291m) before the long descent to Bormio and the foot of the Stelvio. All of that height just lost (and some) will have to be gained back on this final climb of the day. Once again, there is no transition before the climbing starts again.

The total distance for the stage might not be very impressive at 96km, but the 3,560m of climbing puts it well into the “very tough” category. There is hardly a single metre of flat between the five climbs, meaning no time for recovery. It will be absolutely essential to keep pedalling on the descents to evacuate the toxins. Climbing the Stelvio with severe cramps doesn’t bear thinking about!

Flashback to the morning of August 19th, 2014: the temperature was 10°C and it was raining in Bormio. The day’s stage, the 4th of the inaugural Haute Route Dolomites & Swiss Alps, was a time trial from the centre of Bormio to the summit of the Stelvio. The cold, wet weather and the slippery cobblestones in the centre of Bormio augured nothing good for the summit, 1,600m higher up and shrouded in mist. It was thus without much enthusiasm that the riders lined up and took their turn on the start ramp.

A short jink through the old town and it was out on the road, climbing steeply directly from the start. Four hairpins appeared quickly before the last houses were left behind and the road entered the forest.

Bormio is at 1,198m and the summit is at 2,758m, meaning the total height to climb is 1,560m, over 21.9km of road. The average gradient is 7.1% and the maximum is officially 14%. As usual, the bare statistics of the climb hide a multitude of surprises, some more pleasant than others…

To be fair, however, the engineers that built the road did an excellent job. It was designed for transit from the start and thus the gradient is rarely above 9% for long. It is nothing like the Zoncolan or the Mortirolo. Any decent cyclist in good physical condition and a compact gear set can climb the Stelvio, so long as they keep to a steady endurance pace. You are more likely to be beaten by the weather conditions than by the slope itself.

Thus it was in August 2014. With varying degrees of motivation and enjoyment, the 331 ranked participants in the Haute Route made their way up the climb. The rain came and went, often accompanied by gusts of wind. The clouds swirled around the peaks, alternatively obscuring the view and parting to reveal a sodden, rocky landscape.

The iconic 48 hairpins seen in countless photographs are on the other side of the pass. From Bormio there are “only” 34 hairpins, and the climb makes up for this by offering more variety. On the welcome side there are a couple of easy sections, after 5km and again after 16km, and on the less welcome side there are 7 narrow tunnels as well as the final 2km at 12%. During the early part of the climb the road snakes back and forth a couple of times before heading up straight through the forest, occasionally emerging for a hairpin bend offering stunning views across the valley. After 5.5km it turns sharply right, following the flank of the mountain and gaining steadily in height.

Between the 11th and 13th kilometres there are 14 hairpins in quick succession, before the road enters the series of tunnels and after 3km bends around again to the right, cutting off most of the view back down the valley. Shortly afterwards the road forks left to the Passo Umbrail and right to the Stelvio. This is where you will see the disused buildings familiar from the photographs of this side of the pass. The road flattens out and you can at last see the summit high above. The landscape is bare, rocky and windswept. In last year’s weather these final 4 kilometres were a true test of character as the rain turned to sleet near the summit.

For the record, the stage was won by Stefan Kirchmair in 01:06:49 and the lantern rouge was the incredible Christian Haettich, the one-legged, one-armed cyclist who made it to the summit in 02:37:52, just 6 minutes behind the last able-bodied rider, Steven Smith.

For the unwary or poorly equipped, the (untimed) descent in freezing conditions was as much of a test of character as the climb itself…

You have been warned!