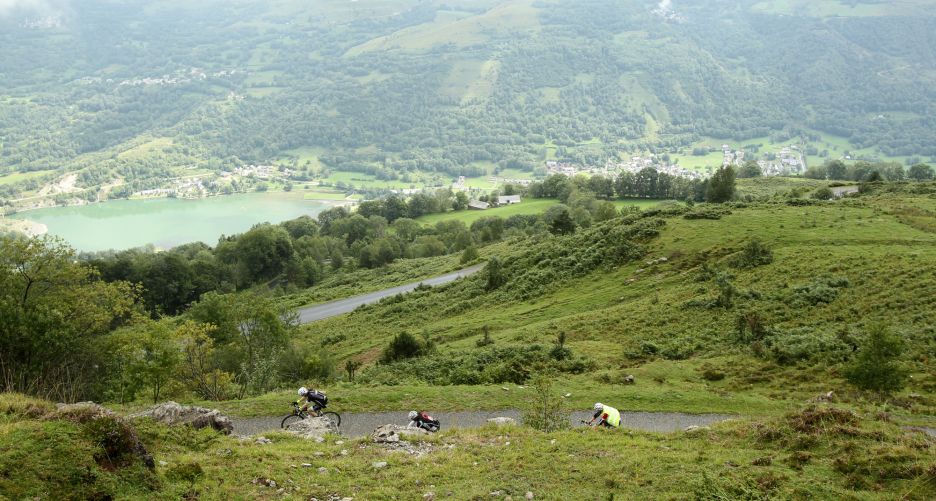 The col d’Aspin has been used 71 times in the Tour de France, which makes it very high in the all-time rankings, behind only its near-neighbour the Tourmalet (84 inclusions). It is often included as one of the four climbs in the famous “Circle of Death”: the Aubisque, Tourmalet, Aspin and Peyresourde.  It is this which gives the col its mythical status.

In and of itself, the col d’Aspin is not an especially hard climb. It has, however, often served as a springboard for attacks…

As you might expect, the list of Tour riders first over the summit is a roll-call of the greatest climbers in the history of the Tour: Robic, Coppi, Bobet, Gaul, Bahamontes, Jimenez, Van Impe, Millar, Chiappucci, Virenque…

In 1950, the col d’Aspin was the scene of an infamous incident leading to the withdrawal of all Italian riders on the Tour. The Italians had dominated the Tour in 1948 (Gino Bartali) and in 1949 (Fausto Coppi), and with two strong teams in 1950 seemed certain to do so again. This was not to the taste of the partisan local crowds, who created an altercation on the Aspin, throwing stones and bottle tops at Bartali and threatening him with worse. Maddened by this, Bartali descended at breakneck speed and took the stage victory, while another Italian, Fiorenzo Magni, took the yellow jersey. The Italians all abandoned the next day as a protest against their treatment. Ferdi Kübler thus inherited the yellow jersey and wore it all the way to Paris.

The col d’Aspin was the second climb of the day on Stage 10 in 1989, after the Tourmalet and before the Peyresourde. The day was marked by the abandon of Stephen Roche, his knee too painful to go on. Charly Mottet and Robert Millar were the first to break away, and led over the Tourmalet. They were joined by Pedro Delgado in the valley, and soon built up a good lead over the peloton. Millar won the stage, beating Delgado in the sprint, third and last stage win for the British rider. Laurent Fignon took the yellow jersey from Greg Lemond by just 7 seconds, the same margin that he was to lose by a few days later in Paris…

In 2012, the year when Bradley Wiggins became the first Englishman to win the Tour, the col d’Aspin was part of a memorable day for the French. Thomas Voeckler became the first person since Jean Robic in 1947 to lead over all 4 major Pyrenean climbs in the “Circle of Death” on the same day: the Aubisque, Tourmalet, Aspin and Peyresourde.  In a famous victory, Voeckler soloed over the Peyresourde to win the stage alone in Bagnères de Luchon.

The 2016 tour saw Steve Cummings win the 7th stage from L’Isle-Jourdain to the Lac de Payolle, passing the col d’Aspin with a 25” lead on his way to victory. This was the 4th victory in 7 days for the South African team Dimension Data, following Mark Cavendish’s three earlier stage wins. At the same time, French favourite Thibault Pinot lost all illusions of a podium place in Paris, unable to stay the pace on the col d’Aspin and finishing 3’ behind his rivals.

So what could the 2016 Haute Route riders expect from the col d’Aspin? It was included in the middle of Stage 5, from Saint-Lary Soulan to Cap de Long.

The fifth day is a tough one, with no less than four climbs in 100km. One can imagine Race Director Jean-François Alcan having a good laugh when de designed this stage. The geographical configuration makes it possible, so let’s do it!

The Hourquette d’Ancizan, climbed from the opposite side to the previous day, is fairly regular for the first climb of the day, if rather steep. This will be a rude awakening to the day, but we will just have to get on with it.

The col d’Aspin is the next one up. We are climbing it from the easy side, Sainte Marie de Campan, and thanks to the Hourquette d’Ancizan, we will be starting from part-way up. It will therefore feel relatively easy, just 6km at 7-8%. After the Payolle lake, the road snakes up through the trees in a series of hairpins. The gradient is steady, with no relief. The views are cut off but the shade may be welcome if it is a hot day. Closer to the top the trees thin out and then disappear. If you look back you can see the astronomical observatory on the Pic du Midi, built in the 1880’s.

Over the top it flattens out. There’ll certainly be a feed station here. A long descent is followed by a long false flat, which will feel good! Time to get in a good group, spin the legs and take a couple of relays to help moving along. 18km of false flat brings us to the foot of the col d’Azet.

From here on, things get more complicated. That is the end of the flat for today. The col d’Azet may be short, but is it hard, the first kilometres are at an average of 10%. Even if it eases off a bit near the summit, one might have said that with all the kilometres accumulated to date a summit arrival could have been a good idea.

But no, on we go, after a dangerous descent we are back in Saint Lary, and there we head off into the unknown, the climb to the Cap de Long. 23km of climbing, 1300m vertical, it is going to hurt! The first 7km are not too steep, but long, and it is hard to see progress. After 10km we turn off the road to Spain, and bam, the climb reaches another dimension. It will make an impression, that’s for sure. The scenery is magnificent, the slope is steep, but just look how beautiful it is… The climax arrives with the view on the lake, end of the ordeal, the mountain is raw, broken, rough, savage.

A must-do of the Pyrenees and an excellent idea to include it in the Haute Route.