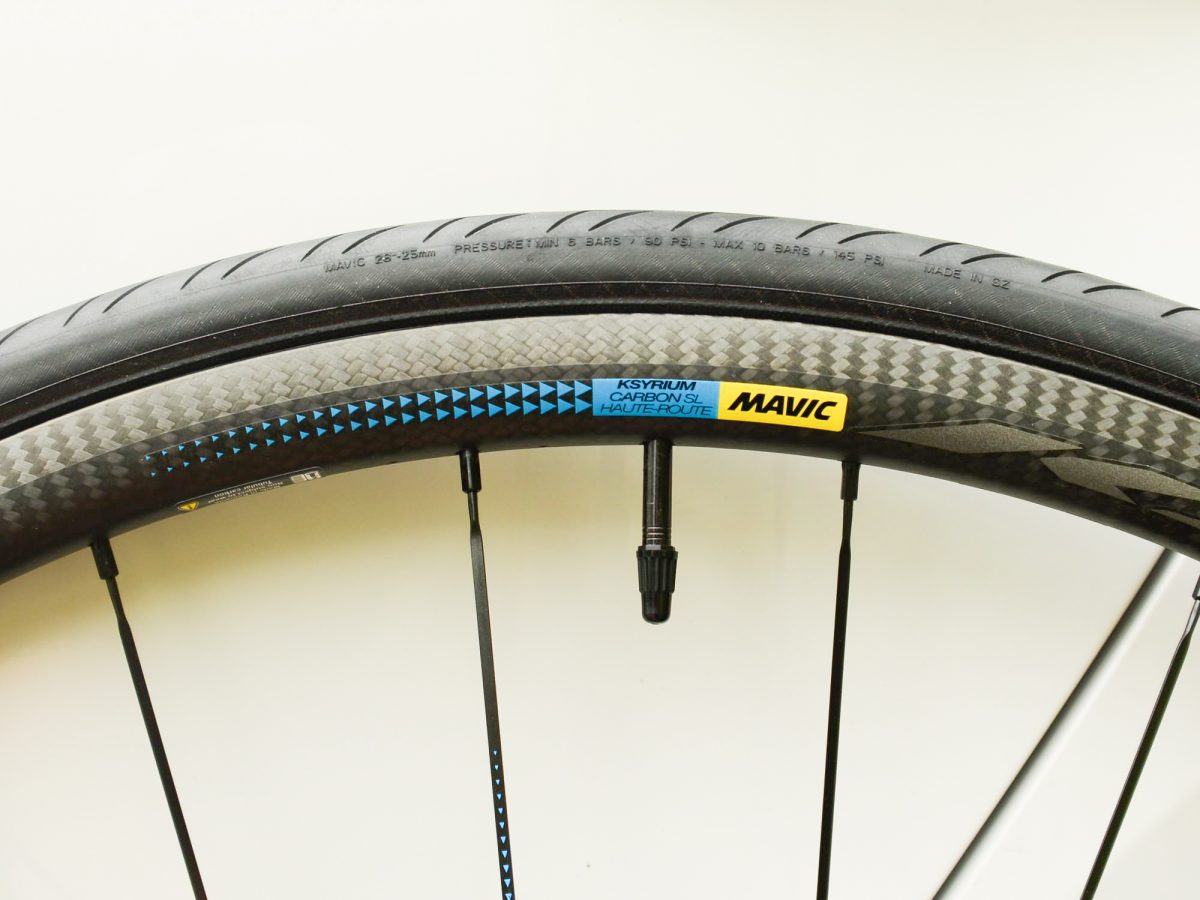 including the summer sportive season (the Marmotte, the Etape du Tour and the Tour du Mont Blanc) and the three 7-day Haute Route events in the Pyrenees, the Alps and the Dolomites. Between us and our clients we have accumulated close to 10,000km and over 120,000m of vertical on these wheels, which were provided by Mavic for our clients to test during Alpine Cols training camps.

So how did they perform?

By any measure this is an exceptional set of wheels: extremely light (only 1,190g per pair*), very stiff, and above all outstanding in the rain. The braking performance of these wheels in wet conditions is equivalent to Exalith or aluminium rims, leaving most of the carbon competition way behind.

In our view, this wheelset is very hard to beat for use in the mountains. The real breakthrough is in the braking: with these wheels, descending in the rain brings no fear.

Read on for the details…

First, a word about the genesis of the Pro Carbon SL wheels.

Braking performance has been the key problem since carbon wheels first appeared on the market. The first carbon wheels were designed for use with tubular tyres only, and the problem only got worse with the advent of clincher versions. There are two distinct aspects to this: braking in wet conditions, where the problem concerns both tubular and clincher wheels, and overheating, where the problem is much worse in clincher wheels, due to the different shape of the rim.

Overheating is a particular concern because it can lead to catastrophic wheel failure. During braking the lost kinetic energy of the rider is transformed into heat, which in the case of rim brakes has to be dissipated essentially through the wheel rim. Unfortunately carbon fibre and resin are very poor conductors of heat, and the most of the resins used to make carbon rims have a melting temperature well below 200°C. The melting temperature is all too often attained under abusive conditions, such as continuous braking on long descents, particularly if the rider is relatively heavy.

Without naming names, we have seen a considerable number of sometimes very expensive carbon wheels destroyed at the Haute Route. During the Pyrenees event in 2015, for example, no less than 10 front wheels failed on Stages 2 and 3, and it was very fortunate that no-one was seriously hurt. In the same year, Mavic’s neutral assistance team at the Etape du Tour reported changing a total of 38 carbon clincher wheels (made by competitors) due to rim failure. The problem is therefore not to be taken lightly.

Although Mavic’s wheels were already reputed to perform better than the competition in this regard (none of the failures that we have witnessed concerned Mavic wheels), they decided to go further.

Mavic’s solution was two-fold: better control of the carbon fibre layup, and a new approach to finishing the brake track.

According to Mavic’s own test results, braking distances are significantly improved under wet conditions compared to the competition, while remaining comparable under dry conditions. You must, of course, use the brake pads supplied with the wheels. You can’t miss them due to the colour (yellow, what else?).

Our own, subjective judgment concords with this. We found that braking under wet conditions on Ksyrium Pro Carbon SL wheels was indistinguishable from braking on wheels with aluminium rims. The braking is progressive, beginning at the first touch, unlike many other carbon wheels where you must first expel the water before braking can commence, and powerful, providing plenty of stopping force.

Under normal conditions the brakes produce a rather satisfying sound, perhaps best described as a muted high pitch whine, almost like a jet engine winding down. The sound reinforces the impression of riding a quality, high-performance product.

I found out at the Marmotte, however, that if you set the brake pads exactly parallel to the rims you will produce a loud screeching noise. This is guaranteed to strike fear into the heart of every rider in front of you, who will quickly clear a path to let you through. Tempting perhaps, but best avoided. The solution is to set the pads at a slight angle of attack. Inserting a folded piece of card underneath the first few mm of the back (i.e. leading edge) of the pad does the trick perfectly.

Throughout the 10,000kms, our testers were unanimous in singing the praises of the wheels. All used the tubular version, the Ksyrium Pro Carbon SL-T, with Mavic’s Griplink and Powerlink tubs. Our heaviest tester, who used the wheels throughout the Haute Route Dolomites (850km and 20,000m of vertical in 7 days), weighs over 100kg and by his own admission braked heavily and often, with no concerns.

The wheel design is such that the full-carbon rims are particularly light, at 450g. This keeps inertia to the minimum and helps improve acceleration and climbing compared to heavier wheels. The 24 spokes provide a high level of stiffness and the lateral rigidity is further strengthened by the 25mm rim bed.

On the road we immediately noticed a difference compared to a standard set of aluminium wheels, such as the Syncros RP2.0 that came with our Scott Addicts. Aesthetically speaking, the Ksyrium Pro Carbon SL wheels matched the bike perfectly, giving it a more serious, purposeful look.

On the road the bike came alive and felt eager to climb, responding immediately to pressure on the pedals. It felt much easier than normal to accelerate to close a short gap on a climb, and during interval training the response to the increased power input was instantaneous. Granted, none of us are sprinters, but we couldn’t come close to deforming the wheels enough to create rub.

This is a continual topic of discussion. The advantages and disadvantages are well known:

If you ride on tubulars, it is essential to carry an aerosol can of Pitstop (made by Vittoria) or the equivalent. In many cases, this enables a very quick and effective roadside repair. I personally punctured a tubular on the col de Chaussy during the 2016 Haute Route and was back on the road in less than one minute after a blast of Pitstop. Unfortunately, it doesn’t always work…

Our position is to ride on tubulars during sportives or on supported rides, and to switch to clinchers during solo or unsupported training rides. We inspect our tubulars regularly and change them at the first sign of damage or excessive wear.

The Ksyrium Pro Carbon SL wheels are an excellent choice for climbers and all those who want to have the best equipment to ride in the mountains. We particularly recommend them for the Haute Route. Tubulars or clinchers, the choice is yours…

* confirmed weight for the wheels we have been using (Ksyrium Pro Carbon SL-T Haute Route), measured without tyres or cassette. This is the tubular version; the clincher version weighs 200g more, at 1,390g.

Nice review. Are the clincher rims tubeless compatible? Mavic has been a bit of a leader in MTB application of tubeless but less prominent in road. Will be interesting to see what happens with wheel technology once disc brake uptake becomes more widespread and endorsed by UCI for the pro peleton

Hi David, these wheels are not tubeless compatible at present. Maybe so in a future version.