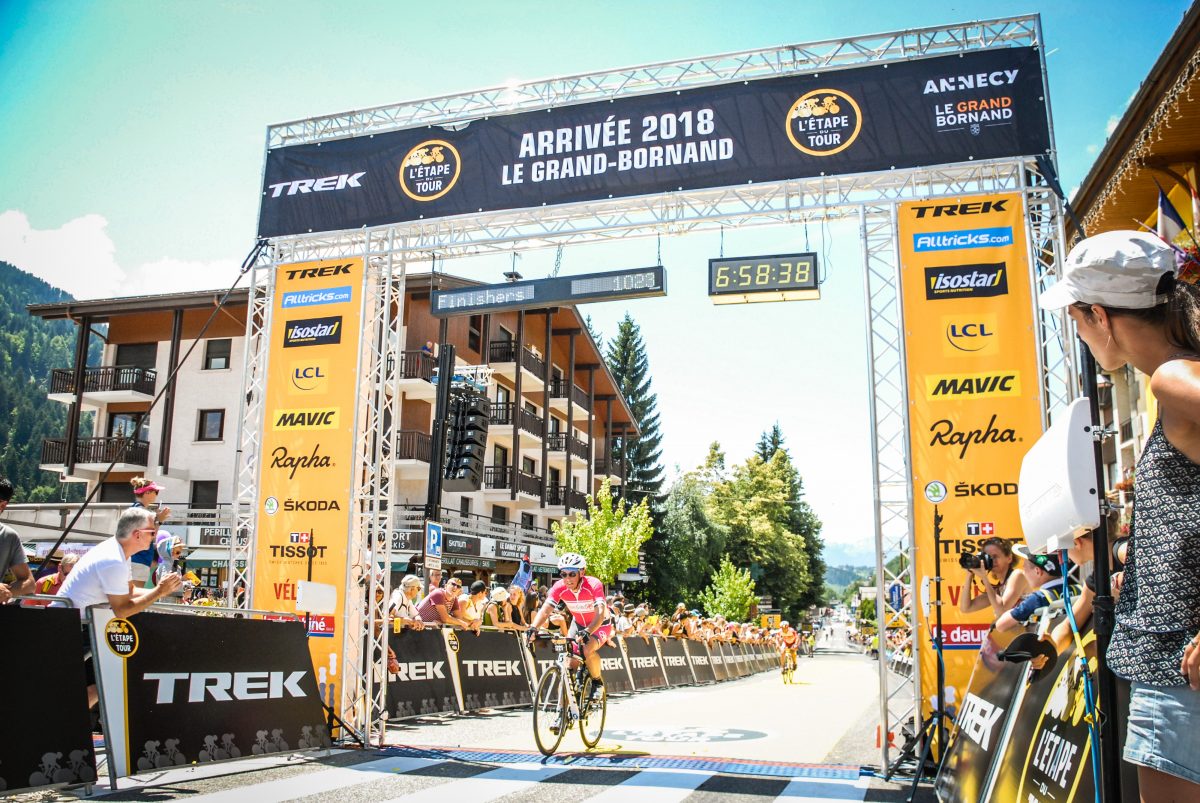 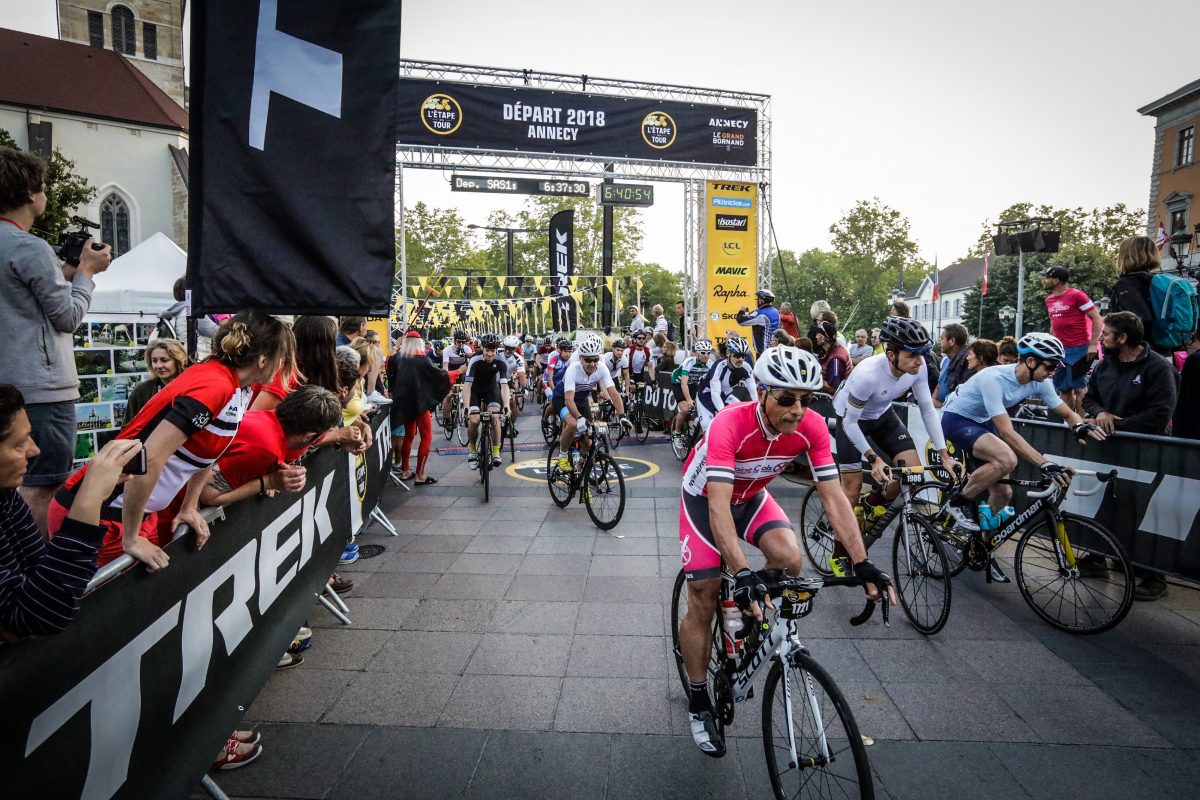 This post about the Etape du Tour starts with an introduction for non-cyclists and finishes with a detailed analysis for the more passionate amongst you. This includes our strategic advice for the race, and a report on my own attempt to apply the strategy!

The Etape du Tour is an annual cycling race for amateurs that follows exactly the same route as one of the stages of the Tour de France in the same year. It is always a tough mountain stage, often in the Alps, sometimes in the Pyrenees or the Massif Central.

This year’s Etape was 169km from Annecy to Le Grand Bornand, crossing three Category 1 climbs and one Hors Category climb, for a total of 4,000m of climbing. It was the toughest Etape for many years, principally due to the steepness of the major climbs.

There were a total of 10 timing points on the course, including the start and finish of each of the four major climbs. It is thus possible to analyse anyone’s performance in some detail.

The two keys to a good performance in such an event are the pacing and nutrition strategies. 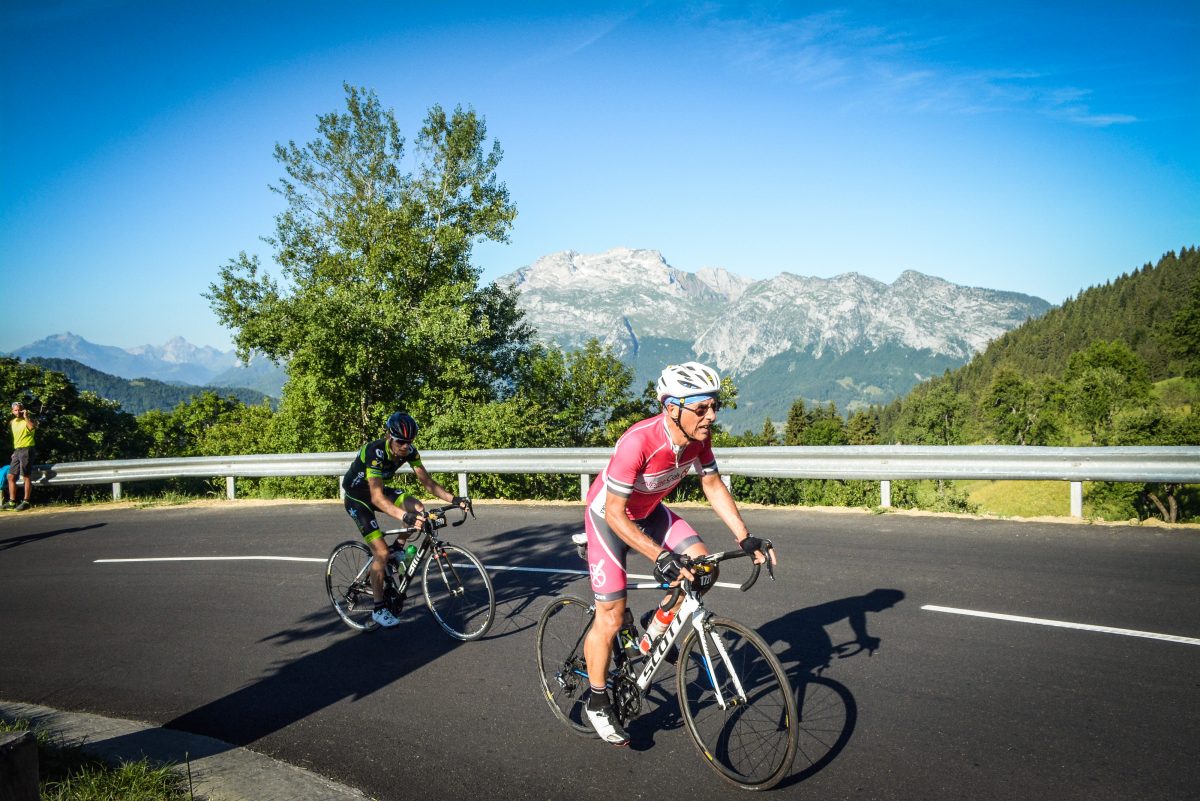 Pacing is the most important: ride too easy and you will underperform; ride too hard and you will blow up before the end. It is especially hard to get the pace right for the first half of the event, where legs are fresh, adrenaline is high and other riders are going past…

You can save a lot of energy by riding in the wind shadow just behind another cyclist (drafting or “staying in the wheel”). To take advantage of this effect, you must be ready to kick hard for a few seconds to get in the wheel and then pay attention to stay there. You will be rewarded by a much more sustainable effort once you are properly drafting. If you fail to do this, you will miss the right group and find yourself the strongest rider in the next group, thus doing all the work!

On a long climb the drafting effect drops to zero so you must ride at your own pace, adjusted for the full distance remaining.

During our pre-race training camp, we split the race into three parts and rode each part separately over four days (one day was spent focusing on descending technique). We could thus determine a target pace for each person, without getting too tired in the days preceding the event. The last two days were spent on easy rides in order to taper as best as possible.

During an event like this you will burn 4000-7000 calories and lose several litres of sweat. Failure to fuel and replace liquids will inevitably result in poor performance (or worse). While each person needs specific advice, our general recommendations are to drink at least one large bottle (75cl) per hour, and to consume the equivalent of 60g-90g of carbohydrates per hour.

Getting this right requires understanding what is in the energy drink in your bottle as well as the food you eat. For most people it means at least one gel and one energy bar per hour, together with the bottle of energy drink and perhaps a couple of dried apricots or figs.

It is not always easy to consume this much in the middle of a race, but you must learn to do so, starting from the gun. Little and often while still riding is much better than an occasional stop to eat all at once at a feed station. 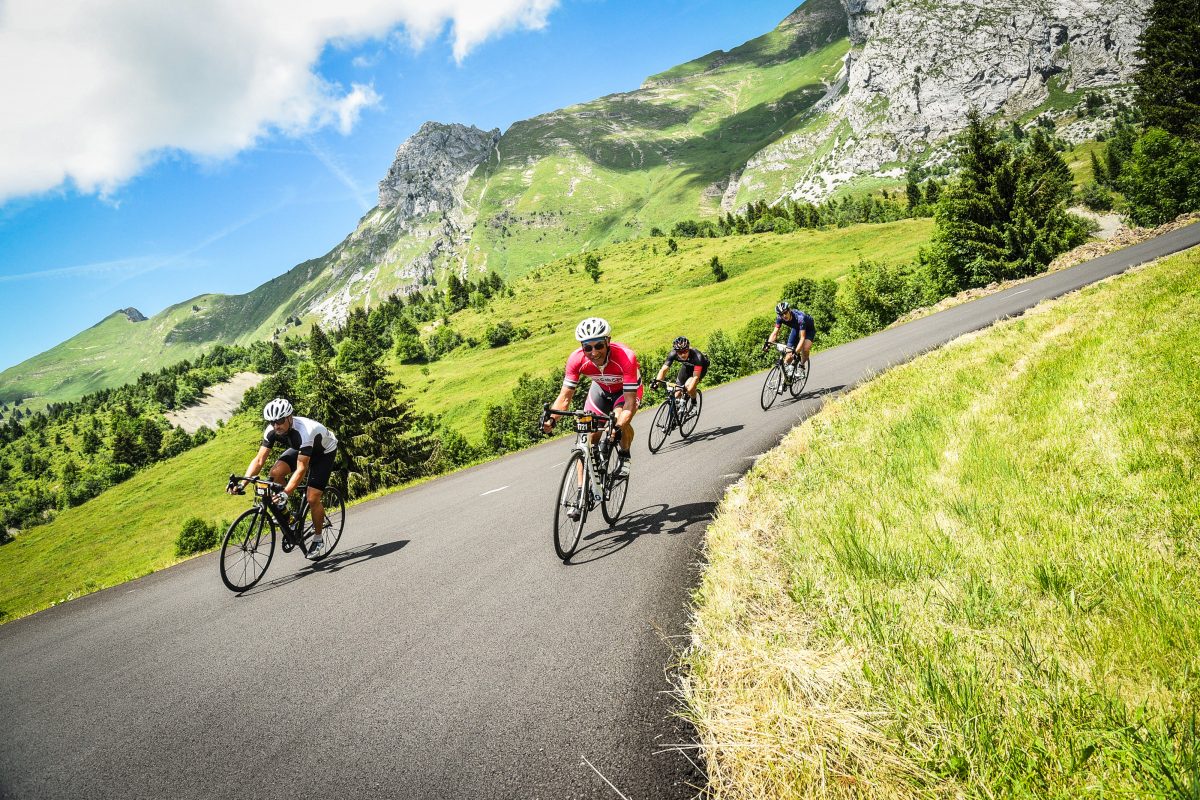 Taking all this into account, Alpine Cols coach Olivier Dulaurent advised our group to adopt the following strategy for the race:

What better person to test your strategy on than yourself? Read on for my account of how it went!

I started out hard and jumped from wheel to wheel until I found a couple of guys riding at the right pace. I covered the first 25km at 40km/hr. My average power was in Zone 2 (61% of FTP), showing that I made good use of the drafting effect. I made a measured effort up the first and second short climbs, at 95% of FTP. Unfortunately I lost the wheels of a good group on the false flat to the Croix-Fry, which probably cost me 30-60 seconds.

I then rode the Croix-Fry in Zone 3, at 86% of FTP. I grabbed my two full bottles from our support and rode fairly hard in the descent, although again I let slip a fast group, perhaps losing another 30-60 seconds.

I climbed the Glières in low Zone 4 as planned, 91% of FTP. I rode steadily across the gravel section and took my time to eat and drink before the steep, technical descent.

It was tempting to climb the col des Fleuries (5km, 5%) at a higher pace, but I stuck to the plan and spun up easily at a high cadence in low Zone 2, 78% of FTP. 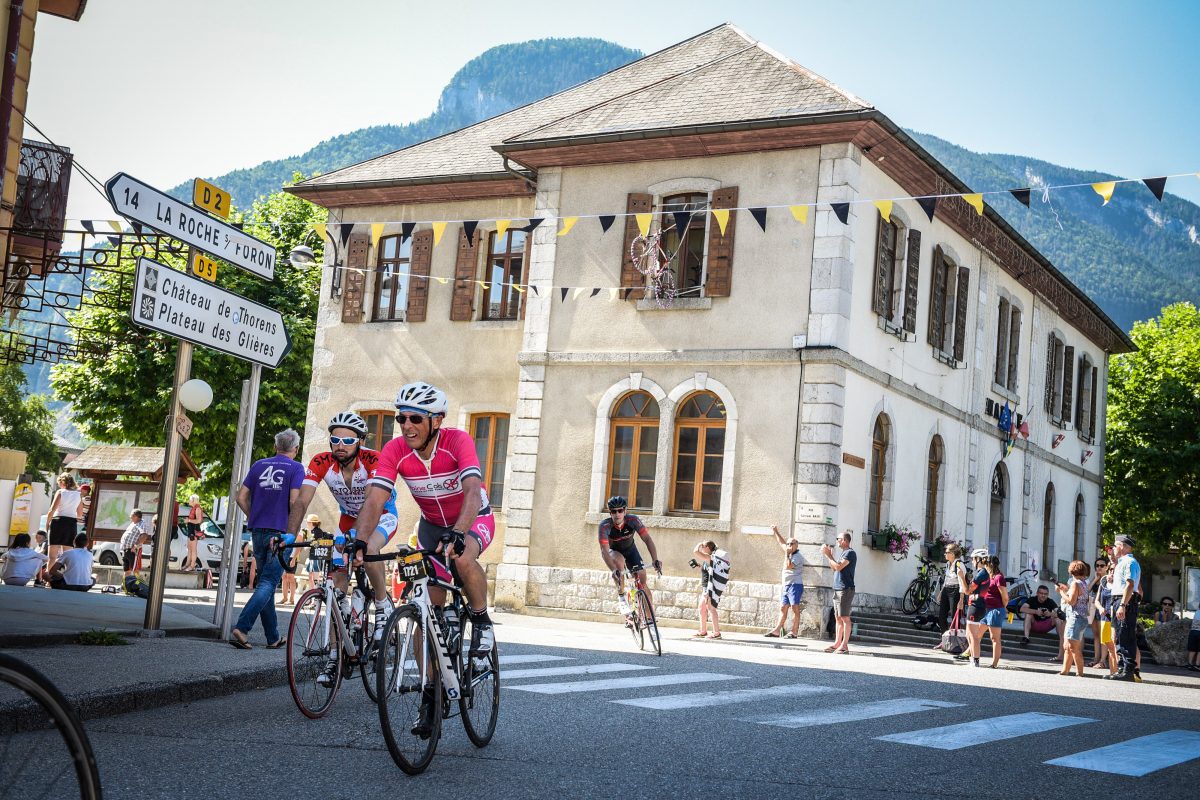 The next section was crucial: 9km of easy descent, a short climb and then another 4km descent before the 17km flat section to the col de Romme.

I foolishly allowed a group to get away from me during the descent from the col des Fleuries and found myself almost alone at the start of the long flat. Fortunately, I was soon joined by two very strong riders and at the cost of several hard efforts I rode with them for the next 17km. We managed a creditable average speed of 37.8km/hr and overtook at least 100 other riders. Again close drafting was the key: in spite of the high speed my average power was in mid-Zone 2 for the 25 minutes this took.

The transition to the col de Romme is extremely abrupt, with the road going from a slight descent to an 11% climb in a few metres. I knew the road well so was ready to switch immediately to small-ring climbing mode, aiming at Zone 3. I climbed the 9km very steadily at 86% of FTP, overtaking dozens of people.

I deliberately slowed down along the false flat after the summit, taking the time to eat, drink and spin the legs before the fast, technical part of the descent.

I stopped for an essential water bottle before the final climb. It was after midday and very hot by now, with little shade. I was unable to sustain the same pace as on the Romme, losing about 10W. I gained motivation from passing more and more people, and an energy gel taken half-way up helped me increase the power for the final two kilometres.

There was little left in the tank when I crossed the summit, but I still found enough to pedal hard on the descent and up the finishing straight. Irritatingly, I was just beaten in the sprint by a person in a polka-dot jersey!

The pacing strategy was effective. Relative to the other competitors, I made each climb faster than the previous one. Here is my classification for the best climber:

The conclusion from this is obvious: many people rode the first two climbs too hard.

Looking back, I could probably have reduced my time by 2-5 minutes by:

For a more significant improvement, I need to increase both my FTP and my endurance at 85%-90% FTP! This is a work in progress, using the polarised training model. Rendezvous next year!

Thanks John! It was as thoroughly enjoyable as a ride can be when you are going all out…