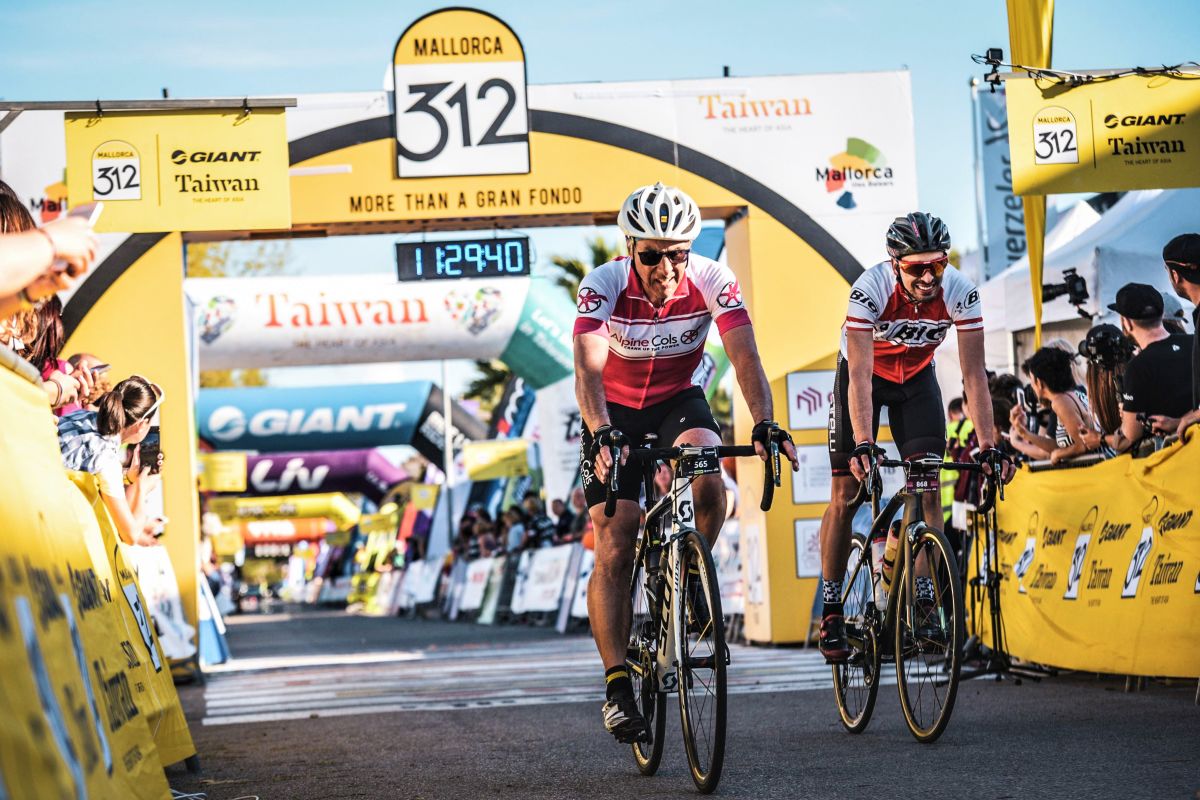 The Mallorca 312 is one of the longest and toughest one-day races open to amateur riders. The 2019 edition was the tenth and took place on April 27th.  The race was originally conceived as a complete tour of the island, but over the last couple of years the route has changed in order to allow for closed roads throughout. It now consists of a loop from Playa de Muro in the north down through the mountains on the western side of the island via Soller as far as Andratx in the south-west, back up again on the eastern side of the mountains and finally completed by a loop out to the eastern corner of the island, finishing back in Playa de Muro. The organisers claim 5050m of climbing (but my Garmin actually recorded only 4,460m).

The Mallorca 312 is very clearly in three parts, with very different characteristics. There’s a flat section, a mountainous section and finally a rolling hill section. It is important to understand this and ride the race accordingly, and it is a great help psychologically to tick off the sections as you go.

The first 25km are flat and on wide roads, leading out from the start to the foot of the first climb. The key here is to get in a bunch and ride fast but economically, saving energy without losing time unnecessarily. It is important not to get carried away – you have over 300km to ride!

The next 135km include all the long climbs. The road constantly goes either up or down: there is no flat. The gradients average around 5-6%, rarely more than 7%. The strategy here is to ride it all at a steady endurance pace, keeping the power up wherever possible on the downhill sections and free-wheeling as little as possible. Unless you are riding with club mates and have agreed to support each other, there’s little value in trying to ride in a group or follow any particular wheel: the risk is to get carried away on the early climbs and regret it later.

You get a huge boost to your morale once you are through the mountain section. The last 160km are totally different, essentially flat but with innumerable low rolling hills and a few short but surprisingly steep climbs. The route varies between main roads and narrow farm roads with frequent sharp corners and sometimes poor road surfaces. This part of the course is very exposed and the wind can have a significant effect. Riding well in this section means getting in a group and making the necessary efforts up the climbs and out of the corners to stay in the group. The pacing strategy is to be as efficient as possible in your group riding and thus achieve the highest average speed for the lowest energy cost. 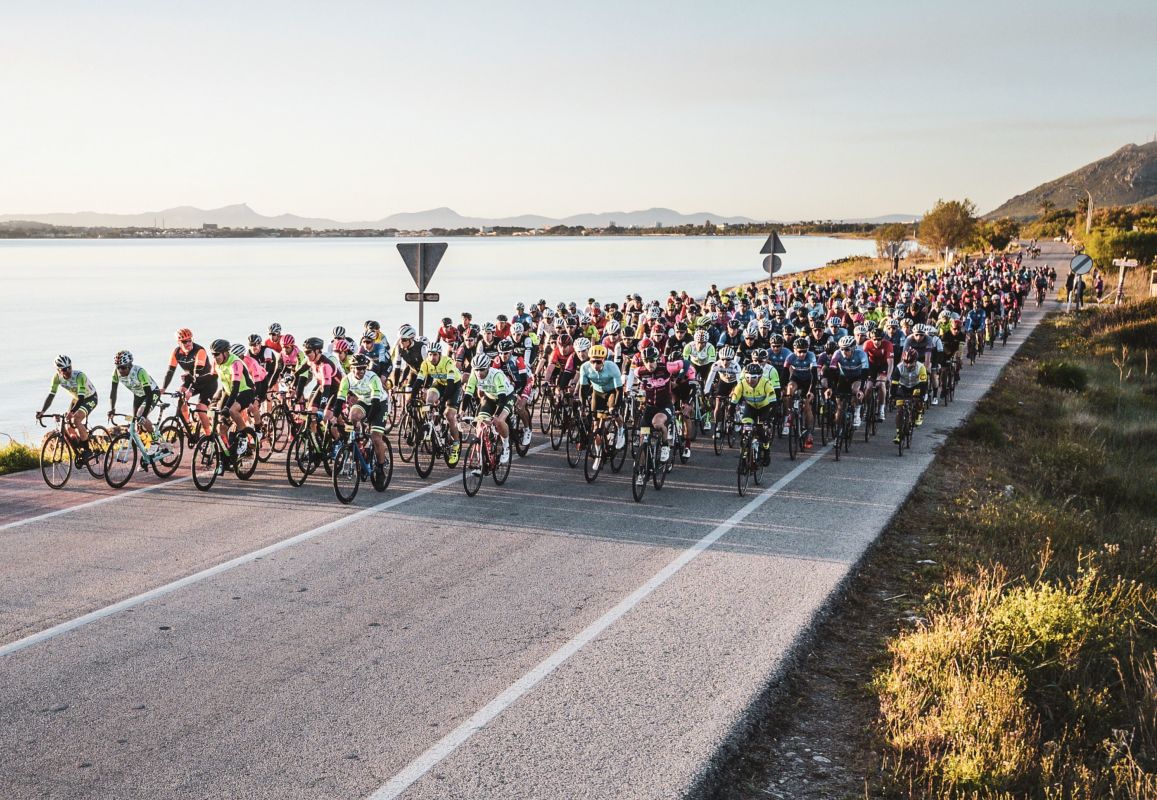 Getting your nutrition right on the Mallorca 312 is just as important as getting your pacing right. You can expect to burn 6000 to 8000 calories during the event, perhaps more if you take more than 12 hours. It is impossible to consume this much on the bike so much of it will have to come from the energy stored in your body in the form of glycogen and fat.

It is thus crucial to start with a full tank. This means eating plenty of high quality, low glycaemic index carbohydrates in the three days preceding the event, and minimising the prolonged hard efforts on the bike that will tap into the glycogen stores in your muscles.

You should eat an easily digestible, carb-rich breakfast, ideally two hours before the start, and then consume between 60g and 80g of carbs per hour throughout the race. A typical gel, energy bar or banana contains approximately 30g of carbohydrate, so depending on the carb content of your water bottles (and how much you drink) you should be consuming around 2 items of food per hour.

Add this up and it means you need to consume over 20 items of food, which requires some serious planning as well as practice beforehand to find out what your body will tolerate.

Calculating my estimated time to each of the feed stations I decided to make 4 stops. I started with 1.5 bottles and stopped at 50km (1h30) to fill both. This then took me to 135km (5h) where I refilled one bottle before riding on to our private stop at 160km (6h20) where I filled both bottles. My final stop was at 240km (9h) where I again filled both bottles, expecting this to be sufficient for the remaining 72km.

The most important thing to remember is to keep eating and drinking from start to finish, even if you don’t feel hungry or thirsty. Since it is impossible to consume as much energy as you are using, any gap in consumption will only worsen the deficit and lead inevitably to at best your being forced to slow down and at worst to a full-on bonk.

At the end of the race you will have a substantial energy deficit, so you will have earned the right to a big dinner and double the normal ration of dessert! 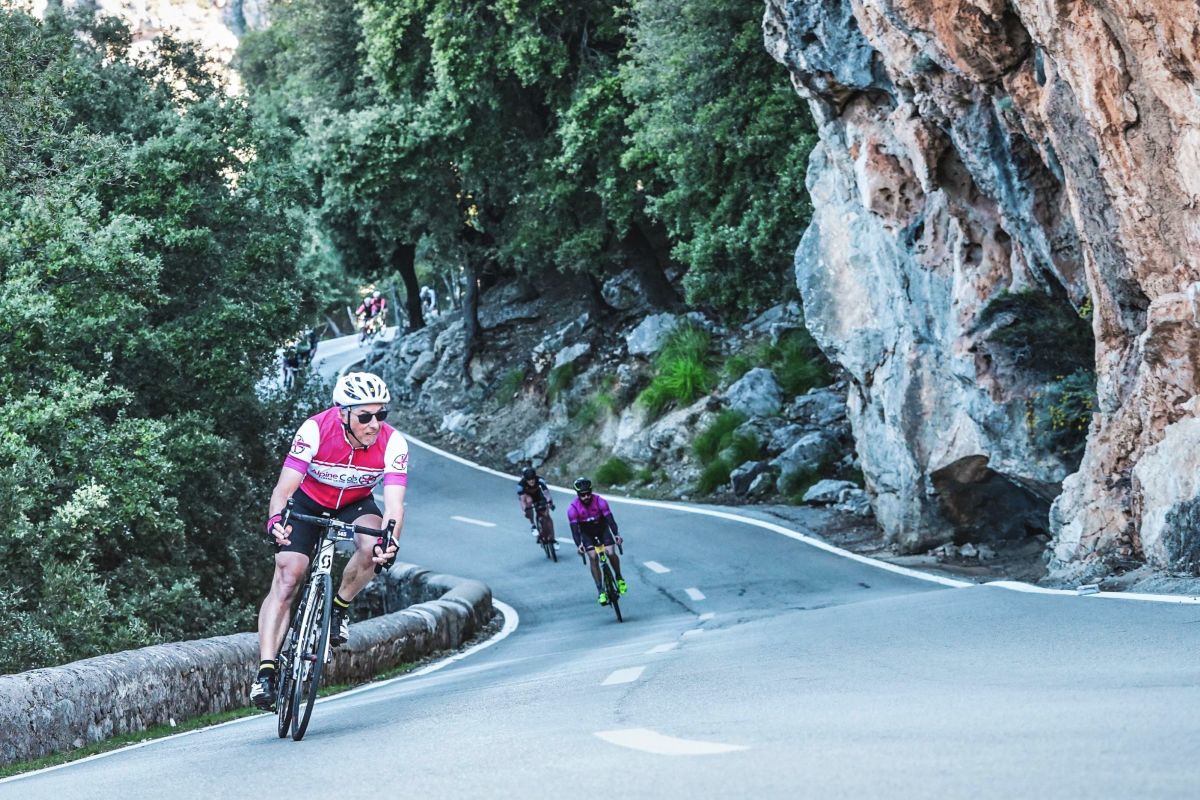 I stuck to the plan as closely as I could, riding hard but conservatively in a group for the first 25km to the foot of the first climb and then settling into a steady endurance pace up and down the climbs for the next 135km. Once out of the mountains I tried (not always successfully) to stay with the fastest groups possible for the final 160km.

This was the longest ride I had ever done (my previous longest was 275km at Liège-Bastogne-Liège – read the report here). I frequently ride for 6-7 hours, so the first half was straightforward. Crossing the halfway point and then the 200km mark were important landmarks, as was 250km and then 275km, when I told myself I was now into uncharted territory, with about one hour to go…

Spending this much time on the bike is more of a mental challenge than a physical one. For sure I was tired towards the end, and I hurt all over, but I knew that I was riding at a conservative enough pace that I’d eventually finish. What helped was that I was in front of my target time, so this motivated me to keep on pushing and to beat the target by as much as possible.

I expected to go through some highs and lows. There were times when I left light-headed, almost euphoric, strong and able to go on for ever; there were other times when my neck or shoulders or backside were hurting badly, my energy was low and I kept looking at the Garmin to see how many kilometres were left, wishing it would end.

It is essential to stay positive and to have a mental vision of finishing the event. I never allowed myself to consider not finishing, or taking the shorter route. I kept myself busy by concentrating on my riding, staying close to the rider in front, taking the realys and by doing and redoing mental calculations: how long until I eat again, what time am I going to finish, what average speed do I need to achieve to finish in such and such a time…

So how did I feel when I finally crossed the line, almost eleven and a half hours after starting? I wish I could say I was elated. The truth is I was too tired to feel much more than relief and a certain quiet satisfaction. I crossed the line in complete indifference to the sparse crowds, who would have seen thousands of people finish the two shorter distances already. I was the 290th out of 1800 finishers at the full distance, 2h40 behind the winner. A decent enough result – better than expected – but truly, the M312 is an endurance race against yourself. On the day, do what you can and be happy with it.

The difference in the three parts of the race show up clearly on the ride file, especially in the average speeds and in the number of “matches burned” (short efforts in excess of 350W or 133% FTP)

During the last 150 km of relatively fast group riding I actually lost my groups a couple of times, and they always dislocated at the feed stations, so I probably rode a good 20km or so alone. At times like these I pressed on at a steady endurance pace while waiting for other riders to catch me up. As soon as this happened I made the effort to jump on the wheel and stay with the new group.

The number of matches I burned in the final section and the higher maximum heart rate gives an indication of the frequent hard efforts I had to make to stay with the group. These efforts are very costly in muscle glycogen which is why it is so important to limit them early on and keep refuelling throughout.

I took my first gel after 40 minutes and thereafter consumed either a gel or an energy bar every 30-40 minutes. Over the entire course I consumed a total of 9 gels, 5 energy bars, 2 bananas, 1 cheese sandwich and some other stuff gleaned at the feed stations (peanuts, dried fruit, etc.).

I drank 5 x 750ml bottles of water. This is below the usual recommendations, but I was helped by the fact that it wasn’t a hot day.

With the benefit of hindsight, I might have had more energy available in the last 5 hours had I eaten and drunk more. Increasing my average speed in this section from 31km/h to 33km/h by riding with a faster group would have reduced my time by around 15 minutes, potentially improving my position by 60 places or so… 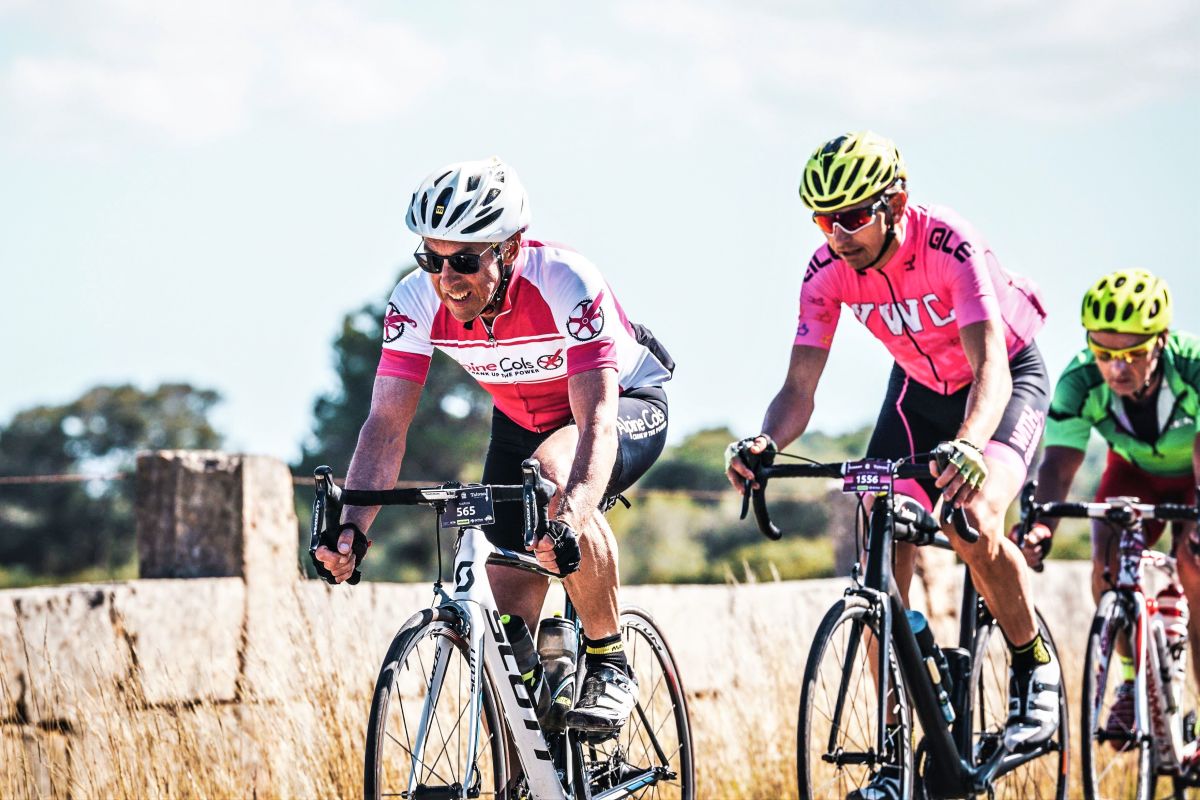 PREPARING FOR THE MALLORCA 312

You should only consider riding the full distance if you are an experienced cyclist who regularly does long distance rides (150km+) and cycles in excess of 5000km per year. If this is not the case, you might be better advised to enter one of the shorter distances (167 or 225km) and prepare for the 312 as a multi-year project.

One of the challenges with the Mallorca 312 for anyone based in the northern hemisphere is that it comes very early in the season. There are absolutely no short cuts in preparing for such a long distance: it means regular high mileage rides and long days in the saddle. For many people this means you will have to get used to riding throughout the winter and in poor weather.

We recommend ending your previous season early, perhaps even at the end of August. Take a decent break of 3-4 weeks with little or no cycling – this is really important to come back fresh and fully motivated – and then begin the build-up to the M312 in October.

It is impossible to give specific advice without knowing your cycling history and strengths and weaknesses. Nevertheless the following general advice will apply to most people:

Ten ways to ride faster at a Gran Fondo, at no extra cost and with very little effort

Join the next Alpine Cols coaching camp: 4-10 August in Switzerland, with the GranFondo Marmotte Valais

If you would like more specific advice from a cycling coach, please contact us. We would be delighted to help.

What an excellent informative article. I will be riding the Mallorca 312 bucket list ride this year. I don’t do Gran Fondos but have been on 16 week professionally design plan.
I found this article very informative particularly the pacing and nutrition strategy as this was something I was struggling to get to grips with.
Thank very much for sharing.

Thank you Simon for your feedback: much appreciated. Were I to rewrite the article today, I would emphasise even more the nutrition. I consumed about 175-220 kCal/hr (45-55g of carbohydrates). Current guidelines are to push this out to 90g/h of carbs, or close to double (the pros sometimes reach 120g/h). Several researchers have shown that this can provide a clear performance advantage (in the real world), but it needs to be trained and practiced.