Sometimes you have to break the rules

Home » Sportives » Sometimes you have to break the rules 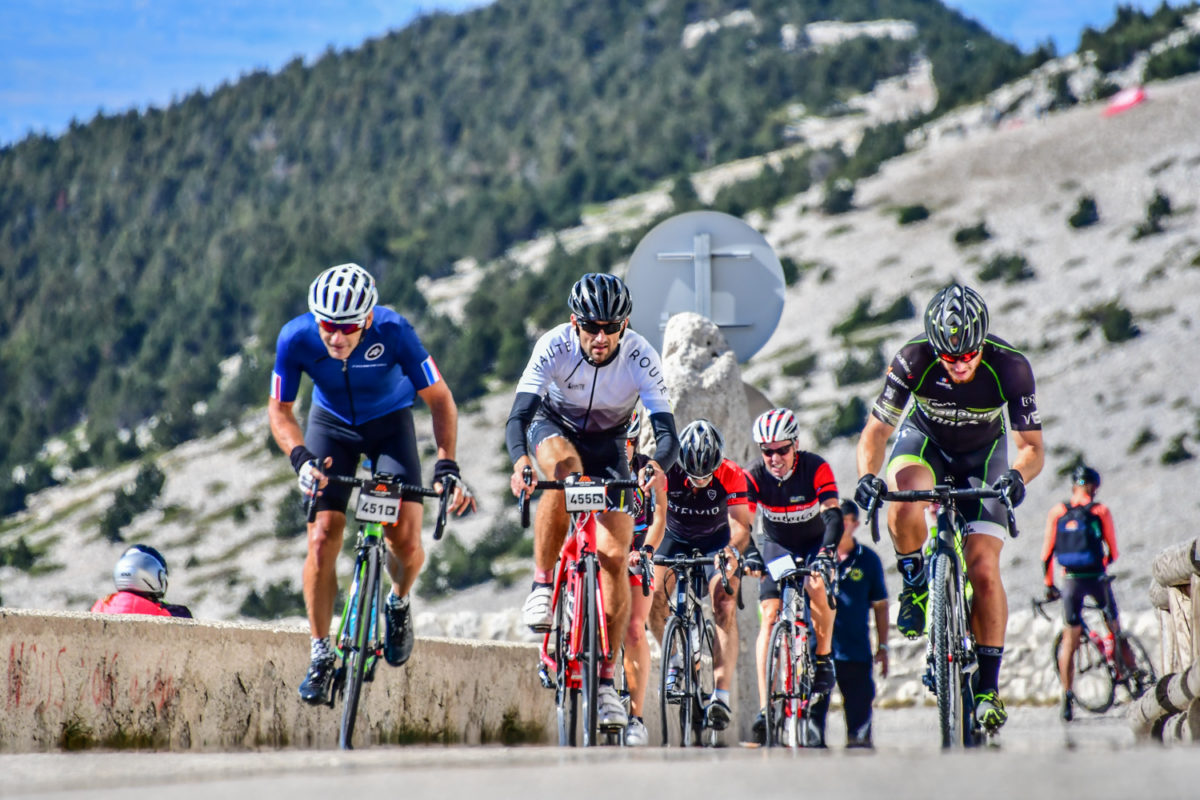 Sometimes you have to break the rules

I changed age category this year, so throughout the season I was keen to make the most of being one of the youngest. The Haute Route Ventoux (4-6 Oct. 2019) was my last race of the year and I was hoping to finish on a high note.

I was feeling strong, and ready to take a risk… Carpe diem!

The normal rule for an Haute Route is to ride conservatively for the first day and pick up the pace progressively from day to day – as I did earlier for a good ride in the Pyrenees. The rule is especially important at a 7-day event, but also applies at certain 3-day Haute Routes, such as Alpe d’Huez, where the climbing starts immediately.

The Haute Route Ventoux is an exception. The first 90km of Stage 1 and the first 110km of Stage 2 are over rolling terrain with mostly easy gradients. This makes it vital to get in a good group and stay there as long as you can. Miss the train at the start and you will never get back on. Catch it, however, and the group will deliver you to the foot of the final climb well in advance of where you would otherwise be.

My strategy for Stages 1 and 2, therefore, was very simple: get in the pen early in order to start near the front, start very fast, ride hard to get in the best group possible, make the effort to stay with them as long as I could. The goal was to stay protected until the foot of the final climb. I just had to be careful not to overdo it and blow up…

Description: 90km of rolling hills, followed by a 24km climb to a summit finish on Mont Ventoux. During the first 90km there were three 7-8km climbs to tackle, with mostly easy gradients around 4-5%. The climb to Ventoux was from Sault, the easiest of the three routes.

Strategy: As mentioned in the introduction: start fast, get in a good group, ride hard to Sault and then climb at a steady 80-85% FTP.

What happened: Conditions were good, cool and dry, only somewhat spoilt by a strong headwind on the final part of the climb to Ventoux. The ride went exactly according to plan. I rode with the lead group of 60 or 70 riders for the first 25 minutes and 17km to the foot of the first climb. I had to make 25-30 serious above-threshold efforts, some of them quite sustained. As expected, the lead group split on the first climb (8km at 4%) and I fell out the back, with many others. From then on I rode with a group of 12 riders for the next 50km or so, until I was forced to stop for a natural break. Riding on alone, I caught several of the group again on the next climb, the col de la Liguière, where I crossed the col after 2h51 in the 55th place. A group of 6 riders formed in the descent and I rode with 3 of them most of the way to the finish, overtaking several others on the way.

Results: 50th on scratch, 2nd in my age category 60+ (where Ralph Sigg is completely untouchable, 27 minutes ahead, in 18th place). Compared to 2017 and 2018, I was significantly faster on all segments except the final part of the climb above Chalet Reynard, where the wind definitely slowed me down. Incidentally this was my highest ever place at an Haute Route.

Summary: A hard ride, but hopefully paced well enough to allow a repeat on Stage 2. As I wrote on Strava that evening: “Now let’s see what happens tomorrow…”

Description: 112km of rolling hills, followed by a 21km climb to a summit finish on Mont Ventoux. During the first 112km there were two 20km climbs to tackle, the first up the Gorges de la Nesque at 2-3% and the second to the col de l’Homme Mort, only 3% on average but the last 4km are at 6%. From there the route was largely downhill to Malaucène and the start of what many consider to be the hardest route up to Mont Ventoux.

The weather was dry and sunny but a strong northerly wind was forecast and we were warned we might not be able to go all the way to the summit.

Strategy: As per Stage1: start fast, get in a good group, ride hard to Malaucène and then climb at a steady 80-85% FTP. The wind made it even more important to be in a good group, because the 20km climb to the col de l’Homme Mort is in a northerly direction and particularly exposed.

What happened: The wind was a major factor in this stage. The ride began according to plan. I rode with the lead group of 60 or 70 riders for the first 12km to the start of the Gorges de la Nesque. Again I had to dig pretty deep to stay with the group. The group split quickly once the climb started and I found myself in the third group of 20-25 riders for the rest of the climb, which we did at a steady pace (80% of my FTP), gaining a PR for the distance. The climb to the Homme Mort was made much harder by a strong headwind and it was great to be able to share the work. By then we were only 6 or so and it was hard for the group to stay together. My power on this segment was 10W higher than in 2018, but in spite of this the wind was so strong it took me over 4 minutes longer.

The group reformed soon after the summit and about ten of us rode hard in the long descent. I crossed the intermediate timing mat at 70km in 60th place after 2h26. Unfortunately soon after this I had to stop for a pressing need and lost the group. From that point until Malaucène, 42km and 1h35 further on, I essentially rode alone. Worse, my stomach rebelled at the idea of taking a gel, and I had nothing else to eat. With low energy I was only able to manage a normalised power output of 70% of my FTP for this period. I then stopped for 2’30” at the Malaucène feed station, which was absolutely necessary to regain my strength, gorging myself on dried apricots, figs and cake. This done, I was able to make a reasonable fist of the climb, managing 82% FTP (and a PR!) for the 1h07 it took me to reach Chalet Liotard, where the stage was stopped, due to high winds on the summit.

Summary: A hard ride in which I was lucky to limit the losses caused by foolishly failing to have the right food in my pockets. A couple of figs or an energy bar would have been perfect. Looking at other riders’ intermediate times, and my own time from last year, this probably cost me 7-8 minutes, corresponding to 8 places on the stage and 3 or 4 places on GC.

Description: This is the most iconic route to the summit and the one always used by the Tour de France. It starts relatively easily with the first 6km at 3-5%, but once in the forest the slope is an unrelenting 9-10% all the way to Chalet Reynard, the famous café where the forest ends and one enters the rocky, windswept landscape for which the mountain is best known. Perhaps to compensate for the frequent headwinds, the slope is a little easier from here, averaging 7-8% for the 6km, with a tough 10-11% ramp in the final 500m.

The weather was dry and sunny, with a moderate northerly wind (on Mont Ventoux, “moderate” generally means “strong on the summit”).

Strategy: My strategy for the time trial was to ride at 85% for the first 6km and then try to hit 90% for the rest.

What happened: As I wrote on Strava: “Well, that was embarrassing”. I started according to plan at 85%, giving me a PR for the first 6km, but about 10 minutes after hitting the steep section and increasing the power to 90% the wheels came off as the last two days caught up with me. I was only able to manage 86% for the mid-section to Chalet Reynard, and only 80% for the final 6km.  There was a terrible headwind for much of the last 6km which slowed me down even more. I finished 8mins slower than last year, losing 4mins on the mid-section and 4mins on the top section.

Summary: I clearly paid on stage 3 for my hard rides on the first two stages. The objective, however, was not the stage but the general classification, and only losing two places overall on Stage 3 in spite of losing over 30 places on the stage itself suggests the strategy was correct. In any case, my final result was a big improvement on 2018 (75th) and 2017 (135th)!

It’s the first time I’ve deliberately ridden very hard the first day of an Haute Route. It was the right approach for the Ventoux, which is a 3-day event where the major climbs come at the end of the first two stages. Here it really paid to make the effort to stay in a fast peloton for as long as possible, the gains on Stage 1 and 2 outweighing the losses on the Stage 3 time-trial.

Riding very hard the first day is not for everyone, however, and certainly not at a 7-day event. In order to pull it off you need to judge it just right so you don’t overdo it; you need to be fit enough to stay the pace over the following days, and you need the physical ability to recover overnight. We’ve seen many people at the Haute Route ride the first day as if it was a one-day GranFondo, get an excellent result and then slip back dozens of places to finish way further back at the end of the week.

I believe I was able to get away with it because I have been cycling over 10,000km per year in the mountains for the past 5 years, including 11 Haute Routes and 25-30 one-day events. I came to the Ventoux fit and rested, with the benefit of a super-compensation boost from the HR Pyrenees and a big week in the Dolomites. I was thus as fit or fitter than I have ever been, and equally important, I had the experience to judge my pace.

In the immortal words of Greg Lemond: “It never gets easier, you just go faster!”

If you would like to learn more about how to get your best result at a GranFondo or Haute Route event, join one of our coaching camps.

We also offer long-term coaching to ensure you come to your events with the best preparation possible. Contact us for more details.