View From The Saddle: The Marmotte GranFondo Valais

Home » Sportives » View From The Saddle: The Marmotte GranFondo Valais 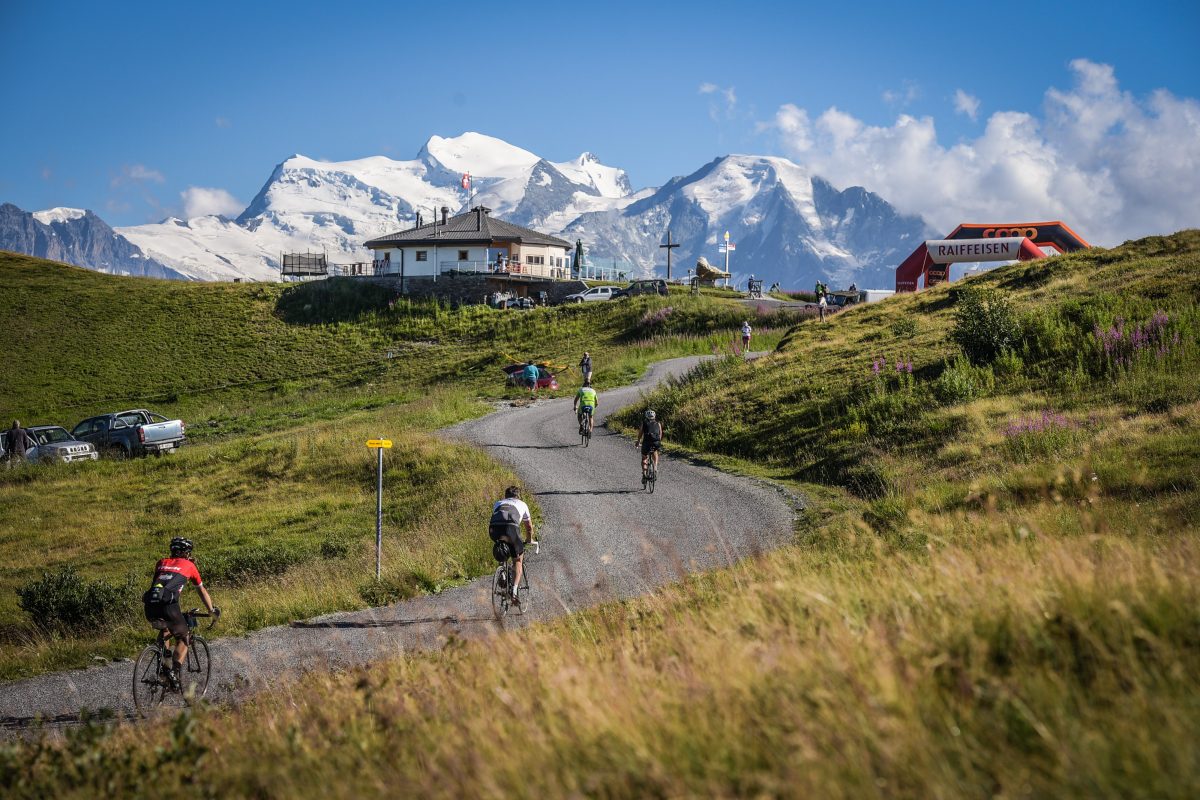 View From The Saddle: The Marmotte GranFondo Valais

Now in its second year, the Tour des Stations is already the most prestigious amateur cycling event in French-speaking Switzerland. The Valais region is incredibly scenic; there is very little traffic on the roads and you are guaranteed a challenging ride on any of the three possible distances:

This article concentrates on the most popular distance, the Marmotte Granfondo Valais. It will take place on Saturday August 10th, between the popular ski stations of Crans Montana and Verbier.

Although it shares the same name, this is a very different event to the Marmotte Alps. Both are challenging events including 4 major climbs and a total altitude gain around 5,000m, but the similarities end there.

The Marmotte Alps is 40km longer in distance, and takes place almost entirely on wide, well-surfaced roads with long climbs and descents at stable, moderate gradients. The highest point, the col du Galibier, is one of the highest passes in Europe at 2,645m. The distinguishing feature of the Marmotte Alps is the very high standard of the field and the resulting physical challenge to being well placed.

The route at the Marmotte Valais on the other hand is mostly on narrow, sinuous roads with irregular gradients. There are numerous short climbs and descents and very few opportunities to recover. The descents are much more technical than at the Marmotte Alps. The highest point, the col de la Croix de Coeur, is at 2,174m, 470m lower than the Galibier. The distinguishing feature of the Marmotte Valais is the nature of the route, adding a substantial technical challenge to the physical one.

Note that these times do not include the initial (untimed) descent from Crans Montana.

The Marmotte GranFondo Valais: what to expect

The route can be analysed in four parts of 30-40km each:

The start is in the centre of Crans Montana. As always in a mass-participation event it is best to arrive early so that you don’t start at the back.

There’s a very short false flat descent before the first climb, 5km and 375m up to the col de Crans Montana (1,805m). This is a good taste of what is to come. The road is narrow and the gradient varies constantly around the 7.5% average. Everybody will climb this too fast: be reasonable, there’s a long way to go!

The first part of the descent is steep (10%) and narrow. Take care here, adrenaline levels will still be high and this is not the place to have an accident.

The remainder of the descent to the valley floor is on wider roads and less steep. Unless you are a very fast descender, expect to be overtaken by people who know the road well.

Once on the valley floor, there are 6km of fast riding on flat, wide roads. Make sure you do this in a group!

The climb to Vercorin starts abruptly in Chalais. It is 8km long at almost 10%, culminating in the village. It is a tough climb, and it is important to settle into a steady endurance pace. The slope hits 11-12% while still in Chalais, before levelling off somewhat through the vineyards to a steady 8-9%. After 4km it flattens out before increasing again. Hugging the cliff face, the road goes through several narrow tunnels before rounding a spur and continuing at 8-10% to the village.

The first feed station is in Vercorin. This is a good place to refill your bottles (km 38). The feed station volunteers were extremely helpful in 2018, taking our bottles and filling them for us in no time at all.

The descent is steep, fast, technical and has a poor road surface. There is no opportunity to rest and recover before the next climb, to Nax. This is 6.7km at an average slope of 5.9%. Like all the climbs, however, the average slope is meaningless since the gradient changes so much. There’s no chance to get into a rhythm, you have to change gear constantly and frequently stand up on the pedals as the slope changes. You are rewarded by fantastic views across the valley: the scenery throughout this ride is truly stunning.

From Nax there is a very short descent before turning off for Vernamiège, higher on the left. This is another charming Swiss village, but you have to pay for it! The total climb is 4.3km at 8.2% average, but again the gradient varies a lot, with sections as steep as 20% or as easy as 1%.

There’s a steep descent to the main road followed by a short climb to Saint-Martin, a pretty village of old wooden chalets, where you will find the next feed station. The route continues with another very fast descent, first up the valley to a tight hairpin, then back down the valley to Euseigne.

The route forks left in Euseigne and climbs up the flank of the next valley for 4.5km (7.2%), before again doubling back and descending to Hérémence and the next feed station.

The climb out of the village of Hérémence is the steepest of the day. The first kilometre averages 12%, with sections at 15-18%. It is a pity to have to tackle this with full water bottles, but you will need at least one because the next feed station is at the summit, in Thyon 2000.

The total climb to Thyon is 10.5km at an average of 8.5%. The mid-section is on a decent road with a mercifully regular 7%, but the final 2km are on a small forest road, narrow and steep.

From Thyon the first 8km of the descent is fast and steep on a good road before turning off to the left, direction Veysonnaz. It is a two-step descent and you flash quickly through Veysonnaz before reaching the bottom of the valley at Beuson (km 102).

From Beuson the climbing starts again, initially on a very narrow, minor road which brings you round above Nendaz, round some more and down again. This portion was mercifully closed to traffic in 2018. It is steep and the road was in poor condition. From the low point you begin at last the final climb to the col de la Croix de Coeur, some 870m higher up.

There’s a welcome feed station part-way up, in La Tzoumaz. The climb is more regular than the earlier ones, averaging 7.5% for the 15 km. The last 6 were on a dirt road until very recently, but this has now been surfaced with a granular, gravelly tarmac that is smooth enough so long as you avoid the loose gravel in the middle and side of the road.

The spectacular col de la Croix de Cœur, perched high above Verbier, is effectively the finish. It’s worth putting everything into this final climb! You could practically free-wheel to the line from here. It is however a vertiginously steep descent on a narrow road with a poor surface, so it is essential to keep your wits about you to cross the line safely some 660m further down!

If you plan to ride the Marmotte GranFondo Valais in 2019 you should bear the following in mind:

Want to perform at your best during the GranFondo?  Join the Alpine Cols coaching camp August 4th to 9th, recce the route, improve your skills and learn race tactics from our expert coaches.

SPECIAL FREE BONUS: Benefit from a 3-month free trial of a set of InfoCranks®, the best power meter currently available (preferred by the UCI development centre and British Cycling).

If you would like a professional coach to help you prepare for this (or any other road cycling event), contact us. We will tell you immediately if we can help or not.